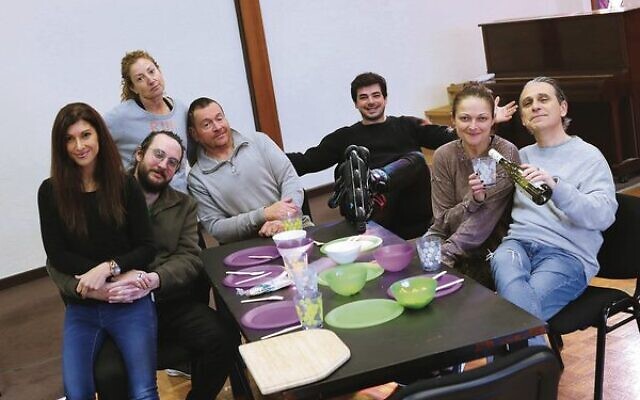 Saltpillar Theatre Company during rehearsals for The Importance of Being Jewish. Photo: Peter Haskin

What do you get when you cross a psychiatrist and a Jewish wedding? A pretty entertaining play.

Playwright Rob Selzer is fascinated by people’s stories, which is why he eventually landed on psychiatry following his medical rotations. It’s also why he became a playwright.

Selzer, who credits his dad, a fine artist, for encouraging his creativity, knows that words have the power to transform lives, and that laughter can be the best medicine. Which is why he’s so proud of his upcoming play with the Saltpillar Theatre, The Importance of Being Jewish.

Everyone loves a Jewish wedding.

As Selzer says, “They’re raucous, loud and very emotional. Between the hora and the whoops of delight, they’re a true celebration. Ask any non-Jew in fact, and chances are they’ll ask you to teach them that ‘awesome dance you do at the beginning with the jumping and the throwing in the air’.”

But imagining everything that could possibly go wrong in the lead-up to the big day, that’s where the hilarity ensues. According to Selzer, the story wrote itself.

“Negotiating the arrangements for the big day can also be raucous, loud and very emotional too,” Selzer laughed. “Add to that, meeting the future in-laws for the first time and discovering there are some religious differences … Throw in a hapless father, a suspicious wife and a daughter determined not to play by rules, and it has the makings for terrific comedy.”

It’s a situation many people can imagine themselves experiencing, which is why the play is so relatable.

For Selzer, it’s seeing these stories come to life, relating them to everyday experiences, that’s the best part of being a playwright.

“I’ll be honest: I love putting words into other people’s mouths. I get to make up characters and then throw them into the middle of a story and see how they react. By the time I’m finished with a script, I love them all, especially characters with faults and vulnerabilities,” he said. “The other great thing about writing is that day-to-day experiences, even the most mundane ones, like making up a name for a coffee queue, become grist for the mill. I’m constantly writing things down and storing them for later.”

When it comes to The Importance of Being Jewish, despite writing the story, Selzer says he finds each and every moment hysterically funny.

“I came away from rehearsals with my stomach muscles aching from laughing so hard … In fact, there are so many storylines and jokes that it’s funnier the second time around.”

The Importance of Being Jewish is showing at the Phoenix Theatre, August 6-21. For more information and tickets, saltpillar.org.au