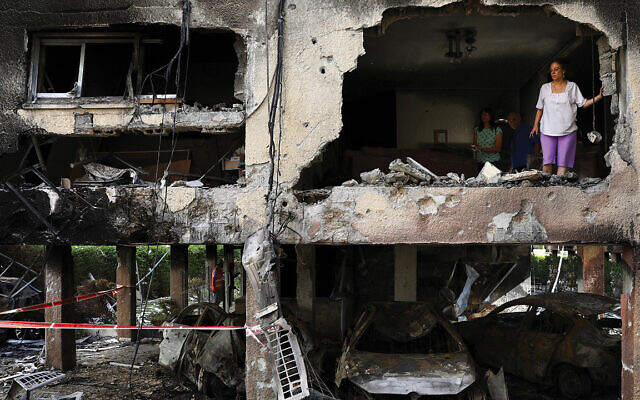 An apartment block hit by a rocket fired from the Gaza Strip in Petah Tikva. Photo: AP Photo/Oded Balilty

THE other day, a non-Jewish friend asked me to explain the situation in Israel and Gaza. So I did. I explained that Palestinian Authority president Mahmoud Abbas – in the 17th year of his four-year-term – had cancelled elections in the West Bank and Gaza and in that aftermath, the terrorist group Hamas was vying for superiority over his Fatah faction by inciting against Israel.

I explained the age-old lie – trotted out again and again – about the Al-Aqsa Mosque being in danger and how it is used to stir Palestinian rioters, who desecrate the holy place by stockpiling rocks within it as they plan their insurgence.

I explained what’s really going on with the mooted evictions in Sheikh Jarrah.

I explained that Israel wants to live in peace with its neighbours and has been shown to be willing to compromise to achieve it. I spoke about the many peace offers that have been outright rejected by the Palestinian leadership.

I explained that Hamas, who started the recent round of violence, is an extreme fundamentalist terrorist organisation that is sworn to Israel’s destruction. I told my friend how the Iranian-funded group’s rockets intentionally target Israeli civilians. I said the terror group places no value on human life and knowing Israel must respond, uses the beleaguered population of Gaza as human shields and stores its military assets among the civilian population, in order to maximise casualties among Palestinians to feed its propaganda war.

After all of this – to my dismay – my friend declared he would not take sides.

“Both Israelis and Palestinians are dying,” he said, to explain his position, adding that the most important thing was for the “tit-for-tat” violence to end.

My friend is a political centrist. He is intelligent. He consumes media that espouses a range of opinions. He is no fan of Benjamin Netanyahu – the numbers of those who profess to be are dwindling even among our community and in Israel itself – but far from being anti-Zionist, he supports Israel and has previously expressed interest in visiting.

The point is this: my friend had not actually refuted or disagreed with what had I told him – he simply thought that to not have a viewpoint for or against either side was an honourable stance to take.

I pressed further. I explained that this was not a situation where fence-sitting is the noble choice; this is a sovereign, Western-allied, democratic nation, yearning for peace, that is trying to minimise casualties versus a terrorist group hell-bent on its destruction. I asked if he had remained neutral when allied forces battled Islamic State. It is not about Bibi, I said, it is about Hamas.

My friend laughed, observing my passion as I delivered my pitch. But then he pledged to look more into the context of the situation. The next day I sent him a selection of analysis pieces to peruse.

Almost a week after we had this conversation, a ceasefire was declared. But in that time, more than 4000 rockets had rained down on Israeli cities, killing 12 people, including five-year-old boy Ido Avigal, and injuring hundreds more.

And despite Israel going to great lengths to minimise non-combatant deaths in Gaza, as it continued its operation to take out Hamas terrorists and infrastructure, tragically, there were civilians among the more than 200 killed, including dozens of children.

Up to 50 of those deaths, reportedly, were caused by the quarter of Hamas rockets that fell short.

Yet the agitators ignore the context and alone demonise Israel. In our media, on our streets and on social media platforms, Israel is singled out as uniquely evil, of committing the worst crimes imaginable and having sole responsibility for the death and destruction.

It is tempting when browsing through Facebook, Twitter, Instagram or TikTok to engage and argue with these virulent anti-Zionists and trolls. I’m here to say don’t bother. You are not going to change their minds.

Don’t waste your energy on them. Use your energy, instead, on people like my friend. Those that are moderate, who may not know exactly what was going on but whose minds are open and whose hearts are not hardened.

A few weeks ago, The AJN reported on a survey, commissioned by Plus61J Media, which found that the majority of Australians sympathise equally with both Israel and the Palestinians, with 79 per cent indicating their views had not changed in the last five years. Sixty-six per cent of those surveyed said they had little or no interest in the conflict.

This is my friend. This is who we need to engage.

There are a number of resources available in the Jewish community and on communal social media pages to help you feel confident with the facts. Indeed, you can read some of the explainers in The AJN from the past couple of weeks if you want to know what was really going on beyond the bias and propaganda.

The anti-Israel trolls are already the minority. One by one, bit by bit, let’s make the chorus of those calling for an end to Hamas’ rejectionism, antisemitism and murderous violence the majority.

Gareth Narunsky is deputy editor of The AJN.