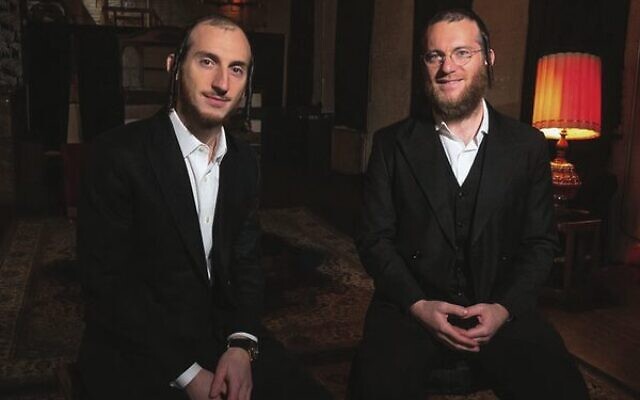 Shulem and Yanky Lemmer grew up in a Brooklyn Belz Chasidic home steeped in music. It is perhaps where they found their inspiration.

The pair listened to cantorial music from their father, while their mother exposed them to more contemporary Chasidic music.

As they grew older, the duo began to sing themselves, with Shulem signing a major record deal and performing for packed stadiums Fenway Park in Boston, Citi Field in New York and more.

In a coup for Australia, Shulem and Yanky will be visiting Melbourne for a one-off performance for Australian fans.

“We have planned some beautiful numbers and beautiful songs and tried to capture a different range and a wide variety of genres,” Shulem told The AJN from the US ahead of their Australian visit.

The brothers explained that they will be singing Jewish, contemporary, classical, and English music, with Shulem saying, “We’re trying to make a combination of everything and trying to give Melbourne a beautiful concert.”

Shulem and Yanky will be accompanied by Shimon and Dov Farkas, with Yanky saying, “I look forward to singing together with the Farkases.”

Both Yanky and Shulem are based in New York City, and despite living relatively close to one another, the pair don’t get to see each other as much as they would like.

“While we do get a chance to perform together which is quite often, it’s always such an ‘ah welcome home’ kind of moment,” Shulem told The AJN, adding that it is “like a fun trip at the same time as work”.

When performing together Shulem explained that they share the burden and the nerves.

However both brothers admitted that they still get nervous before taking centre stage.

Yanky said that a rabbi once told him that when asked if he still gets butterflies before performing he said, “Yeah, I have butterflies, but they fly in formation now.”

“You need to have some nervousness and some insecurity but you also need to be knowing what that insecurity is and going with it,” Yanky said, adding that “fear is what keeps us alive”.

“To let fear take over, that will throw you off the bridge, so the whole world is our bridge and the main thing is not to let your fear take over, but you’ve got to have fear,” he said.

Shulem made history when he became the first born-and-raised Orthodox singer to ever sign a major record deal in the United States, and Yanky is one of the leading New Age cantors on the Jewish music scene.

When asked what it is they love about singing, Yanky said, “It’s like when I’m davening, when an improvisation just works, something just comes, like a flow state where something comes through you, you’re not doing something scripted.”

Of the two brothers Shulem has never visited Australia before, while Yanky has visited once before, albeit only for 24 hours.

“Going to a shule, in general, or being part of a community is something special.

To honour the congregants and their Melbourne fans, Yanky said they are making this concert the best rehearsed performance they have ever done.

“We really want this to be special. It’s going to be better than anything we’ve ever done together.”

The Lemmer Brothers will be performing at the Melbourne Hebrew Congregation on September 11. For tickets, visit trybooking.com/CANZI