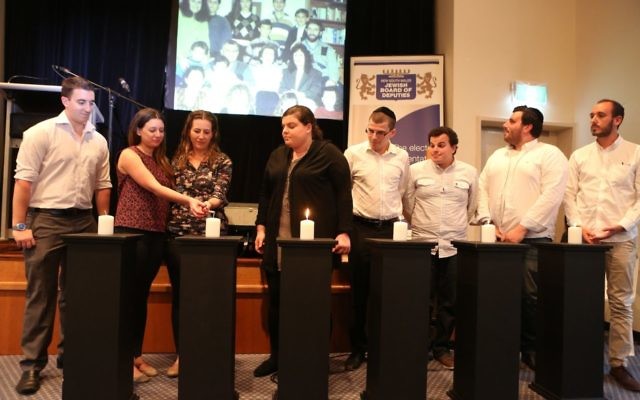 THE Jewish community is “a canary in the mine” for the wider problem of racial discrimination in Australia, Australian Human Rights Commission president Professor Gillian Triggs said at the communal Kristallnacht commemoration on November 9.

More than 350 members of the community joined together at NCJWA Council House for the event organised by the NSW Jewish Board of Deputies (JBOD).

Speaking about racism in Australia, Triggs said there was “a significant marked increase in experience of racial abuse and discrimination”, from 12 per cent in 2012 to 18 per cent this year.

“The Jewish community has special experience of racial abuse and like the canary in the mine it provides an early warning of a wider problem,” she said.

“What may begin with Jews rarely ends with them and it’s of greater concern to all the community.”

Lamenting government policy on issues including free speech, asylum seekers and anti-terror legislation, she said she was concerned Australia has become “like a compass without due North”.

“The Kristallnacht memory remains alive as a powerful reminder that words of racial and religious hatred are destructive for all in society and that we need to be constantly vigilant, to challenge manipulation whether in the public arena via the media or by Parliament.

“The lessons of Kristallnacht are profound and they are universal. We must never be complacent and we must all stand up for the rights that we all share.”

JBOD president Jeremy Spinak told how he first learnt about Kristallnacht from his grandfather at the age of six.

“I saw that my opa was sitting in his study with the door closed and with the lights off,” he explained.

“My grandmother explained to me that … on that day when they still lived in Germany, his business was vandalised, his colleagues were arrested, police came looking for him and he had to go into hiding for his life.

“I view that day as being very important [for me], a right of passage, an opening introduction into the complexities of Jewish history and identity.”

Vivien Gorney spoke about her mother Vera Gorney-Sklan’s experience of surviving the Holocaust.

Vera’s grandson Alex Gorney was among a group of descendants who lit candles in commemoration at the event.

An ecumenical commemoration was also held at noon last Friday in Martin Place, organised by the NSW Council for Christians and Jews.