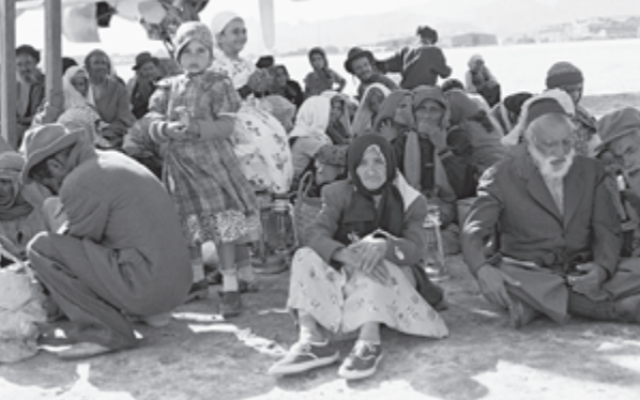 Yemenite Jews wait to board a plane to Israel as part of the ‘Magic Carpet’ airlift in 1949. Photo: David Eldan/GPO

The world speaks of millions of “Palestinian refugees” as a product of the “Nakba – Catastrophe”, the term for Israel’s establishment used by those seeking Israel’s dissolution. When doing so the reference is to those displaced at the time of establishment of the State of Israel and their descendants. Yet somewhere between 750,000 and a million Jewish people (sources vary as to a more exact figure within this range) were also displaced from Islamic countries in the 20th century. They were forced to flee their homes, and the lands where their families had lived for millennia. But they are no longer “refugees”. Even having been dispossessed of their homes and belongings, they have moved on to new lives – whether involved in the building up of Israel or in establishing themselves in Diaspora communities. Yet in a shameful disregard of verifiable history, just two days after the 75th anniversary of the Partition resolution which gave the Muslims of Mandatory Palestine a state that they rejected, the UN General Assembly voted in favour of holding a commemorative event in honour of the 75th “Nakba Day”.

The vote was 90-30, with 47 abstentions. The United States, Canada, Australia the United Kingdom and most of the European Union were among those who opposed the move.

Israeli ambassador to the UN Gilad Erdan tweeted that in “passing such an extreme and baseless resolution, the UN is only helping to perpetuate the conflict”.

In the General Assembly plenum debate prior to the vote, Erdan had called for the UN to “stop ignoring the Jewish Nakba”, referring to Jews expelled from Arab and Muslim countries in the context of Israel’s establishment.

Let me exemplify the reality of the Jewish “Nakba”.

In 1948 there were approximately 150,000 Jews in Iraq. Riots known as the Farhud disturbed the conditions of the millennia-old community in 1941 but things seemed to settle after the war ended in 1945. However, facilitated by lingering anti-Jewish sentiment, further anti-Jewish/Zionist riots broke out in the lead-up to Israeli independence in 1948. After an initial ban on Jewish emigration on the grounds that it would strengthen the fledgling state, increased oppression and anti-Jewish sentiment saw Jews escaping at the rate of 1000 a month. But in March 1950 the earlier ban on emigration was reversed as a result of America/British pressure. Jews were now depicted as a security problem to be expelled. By late 1951 all but a few thousand had left through airlifts entitled Operation Ezra and Nehemiah. After intense persecution (including public hangings) after the Six-Day War, with the permission of the Iraqi government almost all the remaining Jews left after their property had also been expropriated.

In 1948 approximately 75,000 Jews lived in Egypt. Twenty thousand left following the events of 1948/49 and some further 25,000 after the Suez crisis, when 500 Jewish businesses were seized after a formal government proclamation branding Jews as Zionists and enemies of the state. Those who left were forced to sign that they were leaving voluntarily and agreed with confiscation of their assets. By 1957 the Jewish population had dwindled to 15,000. In 1967 many of the remaining Jews were detained and tortured and Jewish homes confiscated. The community practically ceased to exist.

Yemen serves as a third example. In 1948 there were about 63,000 Jews in Yemen, although there had been a trickle of religiously inspired aliyah since the 1880s. When, following murderous riots that had marked Israel’s establishment, a newly appointed imam unexpectedly allowed the Jews to leave, Operation Magic Carpet saw about 44,000 Jews evacuated in 1949/50. Emigration continued on a small scale till civil war broke out in 1962. A small community remained but it has now almost ceased to exist.

In Syria, riots in Aleppo destroyed community property (including the Great Synagogue) already in late 1947. In 1949, 5000 Jews left with permission but then emigration was banned and severe restrictions were placed on Jews. To hamper illegal departures, sale of property was banned and bank accounts frozen. Over the following years, many escaped but had to leave assets behind; in 1954 temporary removal of the emigration ban facilitated further departures. Clandestine emigration continued until in 1992, when, under American pressure, visas to leave were granted on condition that those who left did not move to Israel.

In Libya serious antisemitism occurred during the war when Italian fascist rule was augmented by Germany. However, although the immediate postwar years were largely quiet for Jews, there were some murderous riots between 1948 and 1951. Thirty thousand out of 40,000 Jews emigrated by 1951; within a few years practically none remained.

I conclude with the following. Many of these immigrants to Israel experienced severe difficulties and even discrimination owing to their background. Among the difficulties of the process of integration was not only the impetus for modernisation but also attitudes by the then “establishment” (largely European and secular) to their strict religious practice. Nevertheless, they did not remain passive but worked toward integration and the building up of the state. The difference between them and those commemorating “Nakba” couldn’t be more stark.

That the United Nations supports the falsehood of so-called Nakba without understanding realities that affected Jewish communities, may well be because those communities have largely overcome their disadvantage, especially since the advent of the Begin government in 1977 – so that even the Jewish world may see less need to commemorate what happened. But perhaps also relevant is the extent to which teaching of Jewish/Zionist history – at least until comparatively recently – has been Ashkenazi-centric, a situation finally being addressed with increased research and publications on topics relating to the Sephardi world. The need to redress falsehoods adopted by the international community aside, it is incumbent on the Jewish world to adopt the motto coined by Sephardi Chief Rabbi Ovadiah Yosef, that it is our duty “Lehach’zir atarah l’yoshnah – to return the crown (of Sephardi Jewry) to its rightful place” in Jewish history and society.