Less than 24 hours after devastating explosions at a Beirut port killed at least 100 people and injured thousands more,...

Posted by The Australian Jewish News on Wednesday, August 5, 2020

CHANNEL Ten’s The Project has refused to apologise over a segment on Wednesday night in which Israel was blamed for the Beirut explosion that killed at least 135 people and injured around 5000.

Interviewed by host Waleed Aly, Beirut-based photographer João Sousa was asked if explanations from Lebanese officials that the explosion was caused by ammonium nitrate were “widely accepted by people there”.

Sousa replied, “No. I would say 99 per cent of the people I’ve spoken with … they all feel that that’s not necessarily the correct explanation. 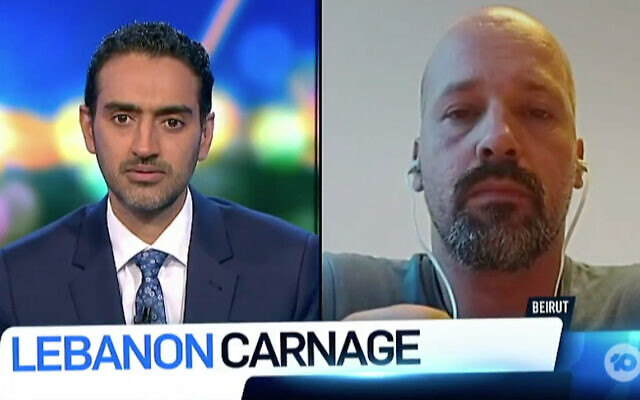 “People are more likely to believe that this was an attack, a military attack, possibly by Israel than an accident.”

He went on to say there was a “historical aspect here that cannot be ignored”.

“Lebanon and Israel are never on good terms, so there’s always this tension going on, and people are always expecting something like this to happen.”

On Thursday morning, The Project deleted the segment from their social media channels, but stopped short of an apology.

In a statement, a spokesperson said, “The Project rejects the suggestion there is any evidence the explosion in Beirut was a military attack.

“As our report last night clearly stated, this is a tragic accident resulting from the mishandling of dangerous chemicals.”

Not only did he not offer any other scenarios, but this has no basis in fact whatsoever and is nothing short of antisemitic libel. You should be ashamed of yourselves. @aus_jewishnews @ZionistFedAus

Anti-Defamation Commission chairman Dvir Abramovich spoke this morning with Chris Bendall, co-executive producer of The Project, to express his concerns about the interview.

“I communicated my profound concerns and disappointment that the photojournalist interviewed yesterday was given a free ride by Waleed Aly to claim, without a shred of evidence, sources, facts or confirmation that Israel might have been responsible for the explosion and the heartbreaking loss of life,” Abramovich told The AJN.

“Allowing such wild and unfounded accusations that defame Israel to go unchallenged by the interviewer, and then to post it online was highly irresponsible.”

He added, “Such false charges should have never been given a platform on a mainstream current affairs show, and should have been rejected and refuted immediately.

“And while I welcome the removal of the video, I urge the senior management at The Project to apologise for this lapse in judgement.”

“This story is irresponsible as it casts unsubstantiated blame on Israel for the tragedy in Lebanon,” Southwick said.

“Instead of running stories like this maybe show how Israel was one of the first to respond with medical assistance.”

Noting that The Project deleted the segment from Twitter, Southwick said, “The next decent thing to do would be to issue an apology.”