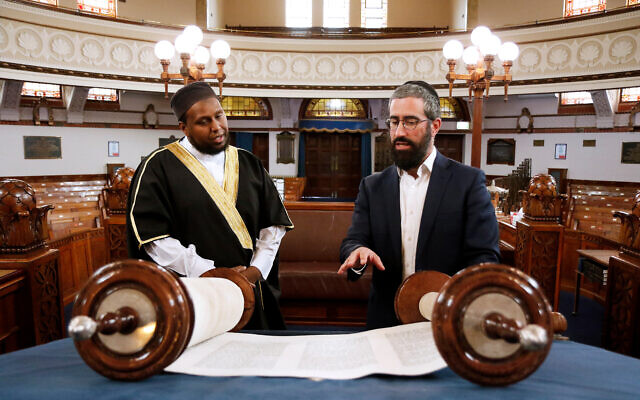 AN interfaith relationship that began after the massacre at the Tree of Life synagogue in Pittsburgh two years ago has developed into a friendship that saw an imam visit St Kilda Shule last month.

In 2018, Sheikh Saeed Warsama Bulhan from Truganina left a phone message for St Kilda’s Rabbi Yaakov Glasman – president of the Rabbinical Association of Australasia – shortly after the shooting to express his horror over the murders of 11 worshippers and the injuring of six others.

The following year, after the massacre at two mosques in Christchurch, New Zealand, in which 51 worshippers died and a further 40 were injured, Rabbi Glasman tried to contact the imam but he had not left a phone number on his voicemail six months earlier.

Early last year, just before the COVID restrictions, Rabbi Glasman attended an interfaith conference in Lysterfield, where he related the anecdote about the phone message to another Muslim leader. Some time after that, Sheikh Bulhan phoned the rabbi, explaining that his colleague who attended the Lysterfield event, had told him a rabbi was trying to locate him.

During his visit to St Kilda Synagogue, Egyptian-born Sheikh Bulhan, who was raised in Melbourne by refugee parents, was given a brief history of the shule.

Rabbi Glasman gave his guest a primer on the shule’s traditions, and Sheikh Bulhan, a Koranic specialist, was shown a close-up view of the texts of a Sefer Torah, which, as the pair discussed, bears great similarities to Islamic texts.

The rabbi and the imam also discussed the global rise of antisemitism and Islamophobia. Rabbi Glasman stated that media images of overseas terrorist violence are unfairly projected onto local Muslim communities. At the same time, the world today is seeing alarming levels of antisemitism, he said.

The pair agreed to meet again, with Sheikh Bulhan inviting Rabbi Glasman to visit his mosque.