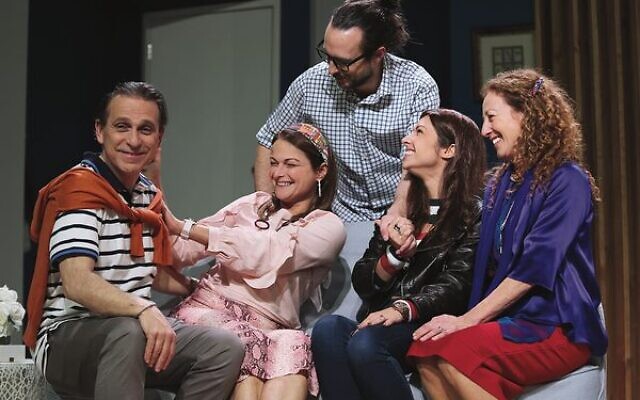 A scene from The Importance of Being Jewish. Photo: Peter Haskin

I confess. I did not write my play, The Importance of Being Jewish as a rebuke to antisemitism. I wrote it – a comedy about a family scrambling to prove their daughter is Jewish so she can marry under a chuppah – because I thought it might appeal to a Jewish audience and it was funny.

Tackling antisemitism was not on my mind.

As Jews, we have learnt to keep our heads below the parapet. If history has taught us anything – and we are a people for whom history lives in the present (take eating matzah over Pesach for one example) – it is that being identified as a Jew can be a health hazard.

Millennia of unspeakable brutalities in pretty much every society on the planet are powerful lessons.

I rage at the savagery of our tormentors. Every seder meal, my family must endure my lingering over the lyrics of Vehi Sheamda (“For not only one arose and tried to destroy us, rather in every generation they rise up to destroy us”). My bookshelf is lined with titles on antisemitism. I force myself to read the obituaries at the end of ADC missives – the children killed by Holocaust murderers – even though it takes several attempts and fighting back tears.

In other words, I am not ignorant about the indignities done to my people in the past. I am, however, painfully ignorant about how to deal with antisemitic humiliations in the present. When a colleague, a respected doctor, drunkenly asked me at a conference, “Where have you hidden your Jew gold?” I fobbed it off, excusing his behaviour on the alcohol; he’s usually a great guy, I told myself. “You lot are good with business,” is another directed my way (the irony is that I am the last person who’d know about business). And then there was the couple at a nearby table in a cafe. “The Jews,” she said. “They need to let go of the war and move on.” Her partner nodded.

I’ve had countless interactions like these, what Deborah Lipstadt calls “dinner party antisemitism”, and yet I was clueless about how to handle them.

But then I read Bari Weiss’ How to Fight Anti-Semitism. In it I discovered that by celebrating my Jewishness I can help diminish antisemitism. That struck a chord. Rather than living in a constant crouch, a defensive position awaiting the next barb, humiliation or usual anti-Israel trope and then having to rebut, I might better display overt pride in my religion. Carrying myself with confidence and exuberance in our incredible history and culture can be a foil to hatred.

Weiss’ advice rang true because doing Jewish things comes naturally to me. I’ll casually drop Hebrew phrases into conversations – mazal tovs for colleagues’ birthdays and baptisms, Shanah Tovah for new years. At our Shabbat table and simchas, we have non-Jewish friends where I attempt to explain the various customs (punctuated by interjections from my family). In my creative work, many of my characters are Jewish.

Why was it then, when it came to promoting my stage play, I held back, reluctant to ask cafe managers to put up posters or display postcards? And the billboards which not only I, but others involved in the production, were hesitant to put up for concern of inciting antisemitism – in the most densely populated Jewish suburb in Australia (Caulfield).

The answer lay in the play’s title.

I had internalised the antisemitism. I had accepted the paradigm of not sticking out my head too far, of not being too Jewish. Of not trumpeting my religious identity too loudly.

Weiss, however, changed my mind. So, I summoned up the courage and started putting up posters and postcards. We erected the billboards. Did radio interviews. And you know what? The doing made me proud.

All Jews need to be proud. There are no conditions on who qualifies. I married out (then in), I’m neither kosher nor observant, and I go to the dentist more than I go to shule. I am no less or more of a Jew than any other, and I’m proud to be part of a religion that has gifted the world so much in art, literature, science, medicine, philanthropy.

We need to demonstrate to non-Jews and, importantly, to ourselves, the beauty and marvels of Judaism. It can take various forms: enacting Jewish values like standing up for those in need, making Shabbat (and maybe inviting non-Jewish friends), bringing cheesecake to work on Shavuot or doughnuts on Chanukah, joining a Jewish sporting team, watching Jewish movies, learning about Israel … you name it, even seeing a Jewish play.

I penned my play as a comic celebration of the messy magnificence of Jewish family life. So maybe after all, albeit inadvertently, I might have diminished the hate just a little.

Countering antisemitism requires more than just defensive parries. Certainly, we need a powerful voice fighting hatred, but we also need a strong demonstration of what it is to be Jewish. And why it is such a remarkable thing.

Rob Selzer is a Melbourne psychiatrist and writer.