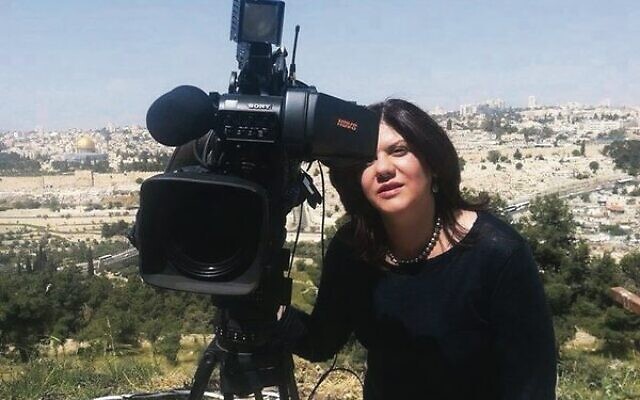 Shireen Abu Akleh, a journalist for Al Jazeera, was killed in Jenin in a firefight between Israeli forces and local Arab fighters. She was wearing a press jacket. A bullet entered her neck just below her helmet. She died on the spot.

This item instantly became the first news story internationally and Israel was roundly condemned. The UN called for an immediate probe into her death. It was assumed from the outset and without evidence that Israeli soldiers deliberately targeted her.

The Abu Akleh family, Christians from Jerusalem, planned to bury Shireen at the Christian cemetery in Jerusalem. It was widely reported that her casket was carried out of the hospital accompanied by a large crowd.

The Israeli police attempted to control the crowd and batons were used to disperse them using what appeared to be excessive force. These events were televised, and Israel was roundly denounced.

United States President Joe Biden immediately called for an investigation. Secretary of State Anthony Blinken expressed his concerns: “We were deeply troubled by the images of Israeli police intruding into the funeral procession of Palestinian American Shireen Abu Akleh. Every family deserves to lay their loved ones to rest in a dignified and unimpeded manner,” he tweeted.

White House Press Secretary Jen Psaki described the footage from the funeral: “We have all seen those images, they’re obviously deeply disturbing. We regret the intrusion of what should have been a peaceful procession,” she told reporters.

The EU High Representative for Foreign Affairs Joseph Borrell accused Israel of “disrespectful behaviour towards participants at the funeral”.

“The European Union is appalled by the scenes unfolding on Friday during the funeral procession of the American-Palestinian journalist Shireen Abu Akleh in occupied East Jerusalem,” he said.

“The EU condemns the disproportionate use of force and the disrespectful behaviour by the Israeli police against the participants of the mourning procession. Allowing for a peaceful farewell and letting mourners grieve in peace without harassment and humiliation, is the minimal human respect,” added Borrell.

“The EU reiterates its call for a thorough and independent investigation that clarifies all the circumstances of Shireen Abu Akleh’s death that brings those responsible for her killing to justice,” he concluded.

Linda Thomas-Greenfield, the US ambassador to the UN, tweeted, “Deeply distressed by the images from Shireen Abu Akleh’s funeral procession. The tragedy of her killing should be handled with the utmost respect, sobriety, and care.”

Later, Biden was asked about the clashes and replied, “I do not know all the details about what happened at the funeral of Shireen Abu Akleh, but I know that an investigation must be opened.”

Whoever is handling the Palestinians’ PR is doing a great job in presenting Israel as the villain. The Israeli authorities should have anticipated mob hysteria at this emotional event and prepared for it accordingly.

However, the story as presented by the international media accusing Israel of murder and brutality is far from the facts.

The international community insists on an inquiry into the death of Abu Akleh, but how can that be possible when the Palestinian Authority refused to allow Israeli pathologists to participate in the postmortem, and why is the international community not condemning this lack of cooperation? We don’t know who killed Shireen, Israeli soldiers or the terrorists with whom they were exchanging fire, and we probably never will.

Israel is widely criticised for brutality toward the grieving mourners but a screaming male mob waving terrorist flags is not quite what one normally has in mind at a dignified funeral.

But the most important point of all, omitted by the international media, is the hijacking of the procession by the mob, who trampled on the feelings of the real mourners, abusing the family’s suffering for their own nefarious political ends.

The night before the funeral, the family coordinated with the Israeli authorities to maintain the dignity of the funeral procession. To this end a hearse was on hand to take the coffin to the cemetery.

Instead, the coffin was snatched from the family against their wishes by the fanatical crowd, who made a mockery of the solemn occasion.

Acting on the wishes of the family, the Israeli Police tried to return the coffin to the hearse, as did the EU ambassador and Abu Akleh’s own family.

The crowd proceeded to convert the funeral into a political flag-waving demonstration. When Israeli police tried to control it, some started throwing stones and bottles requiring the police to implement crowd control measures in order to prevent a riot. This resulted in some injuries to both mourners and police officers.

We in the western world expect funerals to be respectful of the dead. A stone and bottle-throwing screaming mob does not quite fit Blinken’s image of mourners wishing “to lay their loved ones to rest in a dignified and unimpeded manner”.

Robert Magid is the publisher of The AJN.