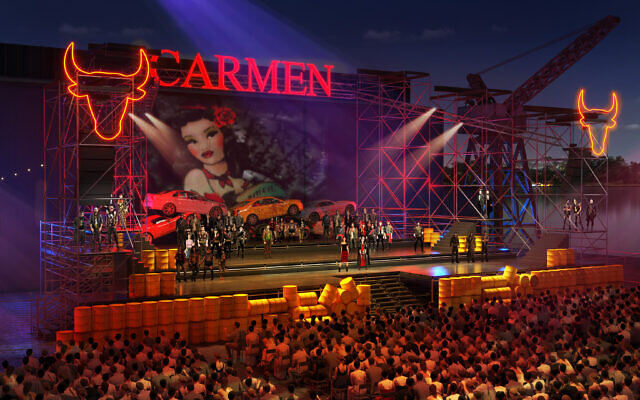 One of the world’s most famous tragedies is being shown in a whole new light – live on Cockatoo Island. While after the premiere in 1875, most reviews for Carmen were critical, the music has since been widely acclaimed due to its brilliance.

The production will transport us back to a tobacco factory in Seville as femme fatale Carmen weaves her magic – tossing her hair and stomping her feet in dance.

“It is always thrilling to be part of any new type of venture,” Sumegi told The AJN. “This presentation will become unique for us once we hit the industrial backdrop of the UNESCO World Heritage-listed Cockatoo Island. A world-class contemporary arts venue, it’s the perfect setting for Bizet’s gritty tale of fate and freedom. Its rich history as a penal establishment in the 1800s will lend added atmosphere to our story about fringe-dwellers, smugglers and soldiers.”

Sumegi also said that there are challenges that come with a performance at an outdoor venue, “particularly when it comes to acoustics”, but that Opera Australia has perfected the issue due to decades of practice. But, Sumegi does have to make adjustments as he himself hasn’t sung outdoors for many years.

“Being summer, we will also have to deal with performing in the heat, rather than in usual air-conditioned theatres. This is always a challenge at the best of times,” he explained.

But it truly will be a beautiful spectacle, which starts at Barangaroo before audience members board a ferry shuttle to the island, covered in layers of history. As described by Opera Australia, Cockatoo Island was once a meeting place for the Eora nation, and is now dotted with the “industrial relics of a century of ship-building and architectural marvels dating back to Sydney’s convict past”.

There will be food and drinks available on the island, and according to Sumegi, “The edgy new immersive production will have motorbike stunts and fireworks, and contains music so popular that even first-time opera goers will recognise and fall in love with it.”

Sumegi is tasked with singing arguably one of the most famous opera melodies ever written, and one that even opera novices would recognise. While the veteran opera singer says this is a bit daunting, he acknowledges the broad musical appeal, saying gone of his favourite parts of the “sublime” score is when the ladies’ chorus emerges from the cigarette factory early in the opera.

For Sumegi, his aim when performing is always to entertain and delight the audience. But as for Carmen itself, he says, “I hope they get drawn into, and carried away by the story, which at its heart is a simple story of love and betrayal.”

Carmen is at Cockatoo Island from November 25 to December 18. For tickets, visit opera.org.au