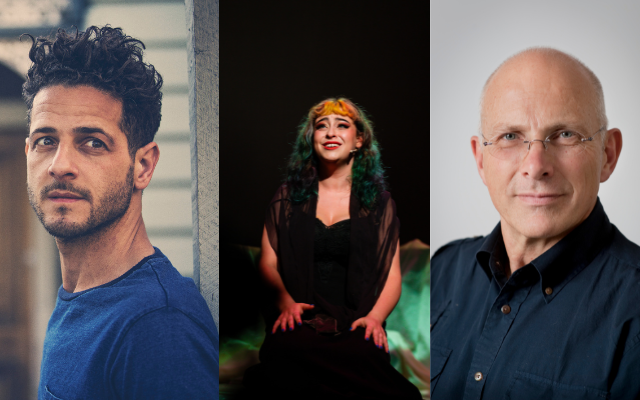 When Lior performed at a memorial for composer Nigel Westlake’s son, it was the start of a beautiful relationship – both personal and professional.

“I’d never met Nigel before,” Lior told The AJN. “They had a copy of Autumn Flow, and he had a connection to the music, so he invited me to perform at the concert. It was a really emotional night, and at the end I chose to sing an a cappella version of Avinu Malkeinu, and spoke about its beautiful message of compassion. It had a real resonance with the audience, and with Nigel.”

The duo began to work their magic together on a full orchestration, and suddenly the stage was set. When their idea was presented to the Sydney Symphony Orchestra, rather than a short work, they were offered a full commission. Conceptually, Lior explained, it grew from there.

Compassion weaves ancient Hebrew and Arabic poems, proverbs and texts together that all deal with compassion, healing and beauty. It was a conscious choice for Lior to use the two ancient cultures.

“I think compassion is the central trait that makes us humans. And I think it’s the most important and beautiful trait that we have as human beings. It’s what defines us.”

“Initially, I thought I’d explore and find other Hebrew texts, but it would be hard to make it not a religious or mono-cultural presentation,” Lior recalled. “There’s that beautiful line [in Avinu Malkeinu] ‘instil me with compassion so I can be liberated’ and to me, that’s not just a Jewish thing, that’s a beautiful universal message. And so, I wanted to use that at the seed and to try and present universality within this piece, not just you know, something that’s essentially exclusively Jewish.”

As Lior explained, the pair wanted to create something that felt sacred and timeless, saying a lot of the musical decisions made meant they intentionally avoided using culturally-specific musical choices.

“We wanted to really draw on our strengths. So, Nigel is orchestrating for a western conventional symphony orchestra. Mine is composing melody and lyrics. So, we just drew on our strengths and tried to put something together that would resonate with people in a beautiful and sacred kind of way, but without placing it in any sort of pigeonholed cultural kind of world.”

Now, they’ll once again be taking Compassion to the Melbourne Symphony Orchestra, to perform as part of FOJAM’s A Night of Compassion.

While the MSO has performed Compassion before, it was outdoors at the Sidney Myer Music Bowl, which according to Lior, is a whole different ball game.

“Outdoor shows have a lovely vibe about them, but you lose a lot of the detail acoustically,” Lior explained. “Nigel’s orchestration in this work is so deep, he really is quite masterful. I think for audiences, it will really expose how beautifully layered and sophisticated this orchestration is when they can hear it in a good acoustic setting.”

Lior, Nigel and the MSO will be joined by Emma Donovan, Paul Grabowsky, Billie Tumarkin and Alex Burkoy in a program of original music and culturally significant works that address themes of compassion and healing.

For Billie, it takes on a special significance, as she comes from a Ukrainian Jewish family. The musician, who has been singing since she was five, explains that lately, she has been singing a lot of folk and cultural music. And it’s this style that she’ll be bringing to A Night of Compassion, even if the audience don’t necessarily understand the words.

“I’m a big fan of singing in as many languages as I can,” she said, going on to explain that she can sing in about a dozen languages. “I find really old music and I try to bring it into the present with us. I think sometimes when we approach old music, it feels very separate from our world now, but I feel like it’s my job to make it feel present to people today, even if the song is 100 years old or 500 years old.”

For Billie, there’s something special about music that transcends all languages. She believes that something can be communicated through song even if you don’t know the words, saying “you can still feel it in the music”.

When asked what “compassion” meant to them, both Lior and Billie didn’t hesitate.

“When I think of compassion, I think of the intersection of hope, but also of pain and that’s what I hope to be able to share,” Billie said. “It’s that intersection of hope for the love that we all hold for one another as people, even while as societies, we face these insurmountable turmoils, conflicts and wars. You can zoom out and you can look at this horrifying big picture. And then you can zoom in, and you can just look at us all as individual people with our own highs and lows, and our own love for each other and our own hope to fall in love to find beautiful things in amongst the darkness.”

It’s a sentiment shared by Lior.

“I think compassion is the central trait that makes us humans. And I think it’s the most important and beautiful trait that we have as human beings. It’s what defines us.”

A Night of Compassion is on Thursday, September 29 at Melbourne Town Hall. For tickets, visit fojam.com