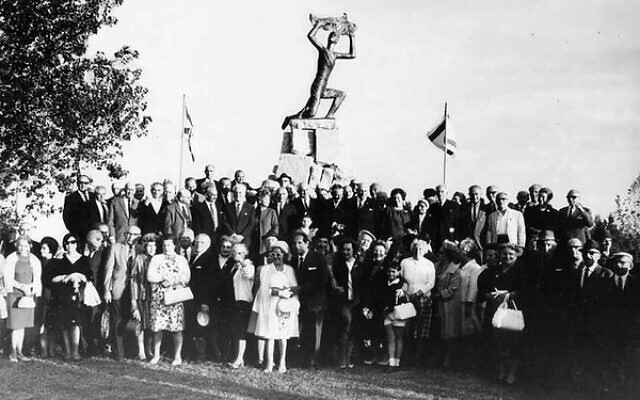 The unveiling of the Hakoah monument on April 28, 1968. Photo: Supplied

It was the middle of the night in Melbourne when I switched on my mobile phone to excitedly watch my granddaughters Andrea and Emma de Jong run in the 21st Maccabiah at the Hebrew University in Jerusalem. Proudly I saw Emma win the 1500m. Long-cherished memories of my own participation in the fifth and sixth Maccabiahs came flooding back to me and I was overwhelmed with emotion.

I was not the first member of our family, however, to play sport in Israel. My late father, Karl Duldig, went to Eretz Israel 100 years ago as goalkeeper for the legendary Hakoah football team from Vienna. Hakoah was the first European football team to go to the Middle East. The team was welcomed by King Farouk in Egypt and also played matches in the British Mandate of Palestine. Contemporary photos show Karl and his teammates on the ship crossing the Mediterranean and in Cairo, where he is standing alongside the ancient masterpieces of Egyptian art – an awe-inspiring experience for the young Viennese sculptor. Karl treasured these memories for the rest of his life.

It is small wonder that when Karl was commissioned by ‘Brith Hakoah 1909’ to create a monument ‘To the Memory of Jewish Sportsmen victims of the Holocaust’ he was overjoyed. After he had finished the giant bronze figure, Dawn, in Melbourne it was shipped to Israel, and together with my mother he went to Tel Aviv to erect the sculpture on site. Although already advanced in age he climbed to the top of the eight-metre scaffolding to carefully adjust the athletic figure at the top of the cairn which he had constructed from Jerusalem stones to symbolise the destruction of European Jewry. The work was conceived not only as a memorial, but also as a symbol of victory for the State of Israel and the rebirth of the Jewish people. On April 28, 1968, 700 former members of Hakoah and other dignitaries gathered for the unveiling of the Monument at the Kfar Hamaccabiah Ramat Gan. It was the artistic climax of Karl’s career.

My own youthful experiences in Israel were not only deeply moving but changed the course of my life. Who could forget marching into a packed stadium when the fifth Maccabiah was opened by Prime Minister David Ben-Gurion.

My diary notes record: “Some 50,000 people cheered as 400 athletes from 19 countries, along with 600 Israeli representatives marched around the Ramat Gan stadium. Apart from the Israelis the largest contingent came from England (97). South Africa (77) and France (60) were also well represented, but surprisingly the United States only sent 40 athletes. The smallest team came from Denmark (three) and ‘there were seven gold-turbaned and blue-blazered Indians, 14 smart Austrians and 13 sprightly marching Australians …”

United Press in Tel Aviv reported: “… Australia’s performance at the fifth Maccabiah exceeded all expectations. Twelve Australians captured a total of six gold medals, three silver and two bronze, making a higher proportion of medals per head than any other country.”

The Australian Jewish community had funded the entire team plus manager at the cost £500 per person. Flying via Manila, Saigon, Rangoon, Karachi and Tehran it took three days to arrive in Tel Aviv. The Games took place only a few years after the War of Independence and the teams were housed in tents that had been captured from the Egyptians in the Sinai campaign.

It was, however, my second visit to Israel in 1961 for the sixth Maccabiah that changed my life. At the tennis courts in Tel Aviv, I met Henri de Jong who was representing the Netherlands in tennis. Five days later we were engaged! We married soon after and were together for 57 years, but sadly Henri passed away in 2019 and was not to witness his granddaughters run last week.

The record-breaking Australian contingent of more than 600 participants at the 21st Maccabiah is to be congratulated. Congratulations also to Israel. The logistics of organising and successfully hosting 10,000 athletes from 70 countries to compete in a multitude of sporting disciplines in diverse age groups cannot be underestimated.

The Maccabiah Games inspire great achievements and kindle lifelong friendships and relationships. They bring together young people from all over the world and they consolidate our Jewish heritage.