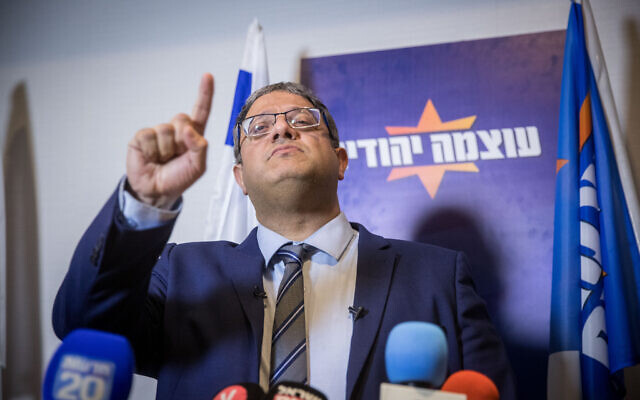 THERE’S a monster in the Knesset. This monster has threatened violence against political leaders. He is the disciple of a terrorist who, among other beliefs, proudly promoted ethnic cleansing. Most distressing, this monster reveres a man who massacred innocent civilians mid-prayer.

No, this monster is not a member of the Islamist Ra’am party, nor is he any other Arab MK – many of whom are openly hostile to the Jewish State. This monster is Jewish. His name is Itamar Ben Gvir.

A lawyer by day, Ben Gvir earned a reputation for defending far-right Jewish radicals accused of terrorism or hate crimes. In the political arena, he leads Otzma Yehudit, the ideological descendant of the Kach party, which in 1994 was declared a terrorist organisation and banned in Israel.

Hoping to strengthen his coalition, Prime Minister Benjamin Netanyahu brought Ben Gvir into Religious Zionism’s slate, betting that Otzma Yehudit would combine with Religious Zionism and Noam (founded to advocate against LGBTQI+ rights) to pass the electoral threshold of 3.25 per cent. Netanyahu’s manoeuvre paid off – the three parties mustered together five per cent of all votes, taking six seats in the Knesset.

So, what exactly does Itamar Ben Gvir believe in? It depends on who you ask. According to political commentator Kalman Liebskind, the campaign to label Ben Gvir as a disciple of the late Rabbi Meir Kahane – Kach’s founder – is misleading. Argues Liebskind, “There’s nothing, absolutely nothing, that connects” Ben Gvir with Rabbi Kahane; who was not only responsible for multiple terror attacks in the United States, but in Israel, advocated for forced transfers of its Arab population into neighbouring countries. Ben Gvir, too, recently bolstered Liebskind’s claims, stating in a February interview, “Otzma Yehudit does not carry on Rabbi Kahane’s path.”

However, further investigation into Ben Gvir’s history causes great concern. In 1995, a young Ben Gvir appeared on national TV, proudly displaying an emblem he tore off then-PM Yitzhak Rabin’s Cadillac. Gleefully, he said, “We got to the car. We’ll get to Rabin too.” A few weeks later, Rabin was assassinated by a right-wing extremist.

Skip forward 23 years to 2018 and you’ll find Ben Gvir speaking at an event. If the enormous banner behind him serves to inform us as to this event’s purpose, it was to commemorate “28 years since the murder of the leader of Israel, Rabbi Meir Kahane”. The banner continues: “Demanding the Kach movement’s disqualification be cancelled.” Finally, it exclaims, “Rabbi Kahane was right!”

Now, if you’re reading this at home, have a look at what your family hangs on its walls. Mine, for example, has family photos, paintings and, among other items, a hand-drawn picture of a Pesach seder that has the entire text of the Haggadah embedded throughout. Ben Gvir, on the other hand, hangs in his home a photo of Baruch Goldstein, who in 1994 massacred 29 Palestinians at the Cave of the Patriarchs in Hebron.

Well, until recently. Prior to Israel’s 2020 elections, after New Right leader Naftali Bennett ruled out partnering with Ben Gvir – precisely due to the photo of Goldstein hanging in his home – Ben Gvir removed the picture. In a subsequent press conference, he explained, “I removed the [Goldstein] picture to prevent a left-wing government.” What, according to Ben Gvir, was so problematic about hanging a photo of Goldstein – who ran for the Knesset on Kach’s list in 1984 – in his home? It wasn’t that he was a mass murderer who targeted innocent worshippers. No. It was that political damage from the publicity surrounding the photo could enable a left-wing victory.

Ben Gvir’s reverence of Goldstein is decades old. In February, Kan News released footage of a young Ben Gvir, filmed on Purim one year after the Hebron massacre, in which he dressed up as Baruch Goldstein. Explained Ben Gvir, “There are people who dress up as Mordechai the Jew, there are people who dress up as Queen Esther, my hero is Dr Goldstein and I’m dressing up as Dr Goldstein, my hero.”

This is the monster who has been granted the privilege of representing Israel’s citizens in parliament.

Each and every second that his shadow lurks around the Knesset’s halls, a poison rips through the soul of the Jewish people. It is a poison that spits on the graves of all those who have prayed, cried, bled and given their lives throughout two millennia of Jewish suffering; all waiting for the moment the Jewish people re-emerged on the world stage, promising to be a light unto the nations.

No realpolitik interpretation of the dirty game that is politics will ever justify Ben Gvir’s inclusion in any Israeli coalition. He is not worthy of the title ‘Chaver Knesset’. He never was, and never will be.

Josh Feldman is an active member of the community involved in informal education and Israel advocacy, and was part of the Australian delegation to the 38th World Zionist Congress.