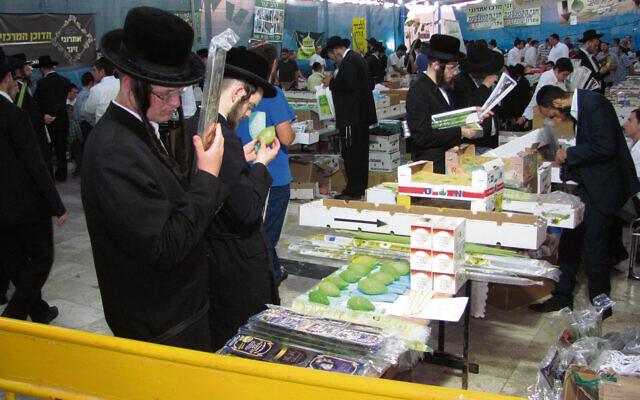 Inspecting the Arba Minim at a Jerusalem market. Photo: Wikipedia

The festival of Succot brings up an interesting discussion in the Babylonian Talmud. The Mishnah (Succah 3:1) rules that a stolen lulav and a dried out lulav are both invalid for use.

The above-mentioned two types of lulav are indicative of the types of material that may not be valid for ritual use: that which is spoiled and (in this instance dried out) and that which is stolen – representing a moral problem, because it has been taken unlawfully.

By comparing these two blemished lulavs side by side in the Mishnah it shows that they are considered to be equally serious problems. The wider question then becomes: if undertaking a mitzvah is only possible through theft would such a mitzvah be acceptable?

Instinctively, a stolen lulav seems like it should be automatically ruled out for use during the festival. The prohibition against stealing is one of the Ten Commandments and the prophets of Israel make it very clear that stealing is unacceptable to God, with the prophet Isaiah at 61:8 noting: “For I, the Lord, love justice, I hate robbery with burnt offering.”

However, the Talmudic discussions that ensue are less strident in their approach.

In the Babylonian Talmud the discussion centres on a concept of “a mitzvah that occurs as a result of a sin being committed”. The sages compare a stolen lulav to the equivalent of a “lawyer for the defence switching sides to become the prosecutor”. In simple terms, this refers to an act that should be used to please God, but instead the acquisition of this stolen object has become a reminder of the sin committed in order to offer up this praise to God.

While some of the Babylonian Talmudic sages note that a stolen lulav would certainly be forbidden to use during the festival because of the reasons mentioned above, the opinion of the sage Shmuel is quoted noting that a stolen lulav is only forbidden on the first day of Succot, and on subsequent days it can be used during the festival, just like one could use a borrowed lulav.

Shmuel sees the verse “you shall take for yourselves on the first day” as disallowing the stolen lulav only because you did not take it for yourself, rather than a moral issue relating to theft.

In the Talmudic discussion, according to Shmuel using such a lulav after the first day would be allowed, just like one would be allowed to use a borrowed lulav. Shmuel’s position moves the issue of the stolen lulav from the realm of a moral dilemma to a technical issue that can be resolved through an intricate reading of the text.

The Babylonian discussion then concurs that for the first day of Succot a stolen lulav would be prohibited, but subsequent days it would be allowed, while the Jerusalem Talmud takes the hardline approach that such a stolen lulav would always be disallowed and forbidden. It is considered invalid for use.

The Jerusalem Talmud takes this position from the verse that requires a person to take “for themselves” a set of the four species, with the Talmudic discussion focusing on this phrase requiring such a person to own the item in order for it to be valid, rather than using a stolen one.

How can we understand the difference between these two approaches? On one hand, by allowing the Babylonian position to change from a moral to technical application of the law it seems to water down the importance of not stealing in order to perform a mitzvah.

When looking at this question it is helpful to understand that the Babylonian Talmud was written at a later period than the Jerusalem Talmud, perhaps benefitting from a broader understanding of how the Talmudic legal intentions should be applied when looking and extrapolating laws.

However, despite this, the Jerusalem Talmud still seems to have a superior moral position relating to forbidding the use a stolen lulav.

In fact, that may be the answer that is inherent to understanding the different approaches to the stolen lulav. Perhaps the Jerusalem Talmud is taking that position that a mitzvah born out of a sin is not allowed; this is the position of Rabbi Yochanan when he discusses why a stolen lulav wouldn’t be permissible.

Rabbi Yochanan is also the author of anther line in the Jerusalem Talmud that asks, “why was Jerusalem destroyed?” The answer is that although the people judged according to the Torah law, they did not do so with the right intention, with a sense of kindness and compassion that is beyond the arbitrary reaching of the law. (Baba Metzia 30b).

This seems to be Jerusalem Talmud’s approach in prohibiting a stolen lulav. Forbidding the use of a stolen lulav could refer to the obvious theft of the lulav itself, but also an understanding of the spirit of law, whereby using a lulav that has been acquired through cheating, through improper purchase, through taking it from a farmer or through taking it by someone who has been exploited and has not been paid for their labor.

In the case of the stolen lulav, while it would technically be okay for use from the second day onwards according to the Babylonian Talmud interpretation, it leaves a lot lacking for moral and righteous behaviour.

It fulfils the letter of the law but not the spirit of the law. In this spirit, it is always better to use a lulav that has been paid for and acquired honestly, in keeping with the message of the prophets that robbery and stealing does not fulfil God’s wishes.

Nomi Kaltmann is the inaugural president of the Jewish Orthodox Feminist Alliance, Australia. A practising lawyer, she writes regularly and is a former fellow at Tablet magazine.