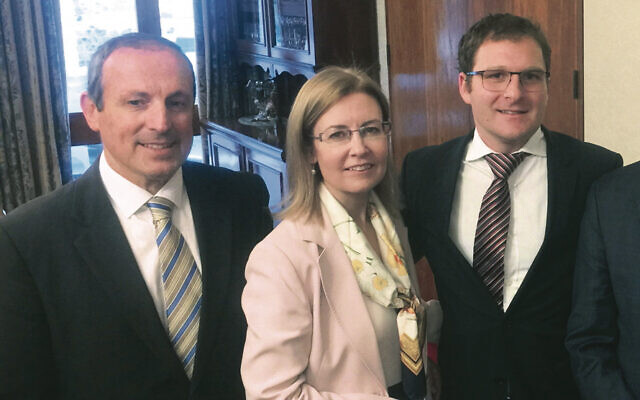 I am deeply grateful to Vic for his decades of long service to the Jewish community both as CEO of the NSW Jewish Board of Deputies and editor of The Australian Jewish News. His legacy for advocating for his community and for supporting interfaith activities across NSW is unparalleled. For that I thank him deeply on behalf of the people of NSW.

Vic has been a tireless worker for the Jewish community in various capacities for more than three decades and most recently, he was at the forefront of the successful campaign to reform the state’s anti-racism laws. I thank him for his many years of advocacy and service to the community.

There will be truly big shoes to fill when Vic leaves the building.

I have been privileged to have worked closely with Vic to call out antisemitism and hate speech. At each and every opportunity Vic serves and protects our beloved Jewish community with all his heart. I have been so humbled to have had the opportunity to walk beside him.

I am so pleased to acknowledge the outstanding commitment and dedication Vic has shown.

I first met Vic before I was elected to the NSW Parliament. That was the start of a wonderfully strong working relationship which included establishing the inaugural NSW Parliamentary Friends of Israel. We are all eternally grateful for his friendship and leadership.

I’ve known Vic for 30 years and he has continually surprised me. While he has always been one of the strongest advocates for Judaism, the Jewish community, Israel and promoting tolerance and harmony in our society, he astonished the community when he took a principled stand almost 21 years ago on gay rights. It was pretty gutsy.

I have known Vic since joining public life and have always enjoyed our interactions. I have found him to be warm, engaging and insightful. Our meetings have allowed me to gain a deeper understanding of issues including antisemitism, burial space and education.

I congratulate Vic Alhadeff on 16 years of devoted service to the Jewish community in NSW. Whether it be the growing spate of anti-Semitic abuse, the fight to retain s18C of the Racial Discrimination Act, or the securing of a new Jewish cemetery in Sydney, Vic has been a voice for our community through challenging times, and has championed our causes with strength and grace.

Vic has been a tremendous leader over many years, and I’ve had the privilege of working with him in a number of roles. Vic’s decency, kindness, dedication and intelligence have helped secure progress on many fronts, and his contribution to the health and security of the community, and his broader contribution to interfaith harmony, should be appreciated by all.

Jeremy was always grateful for the invaluable support and advice he received from Vic during his years at the Board. The family wish Vic all the very best and wish to thank him for his tremendous work and his commitment.

Vic has been one of the most outstanding communal professionals our community has been served by in recent memory. His absolute commitment to the community, but more importantly to ensuring people of all backgrounds have been treated fairly, is unparalleled. Vic brought a work ethic and a personal ethic that was flawless and ensured our community was represented in a warm, positive and uncompromising manner.

I had the great pleasure of being the first president to work with Vic. Together we began the task of professionalising the work of the Board and ensuring that in the political sphere, and in the media, there was the strongest possible positive perception of our Jewish community. There can be no doubt Vic achieved those goals and more. Our community is the richer for Vic’s loyal and outstanding service.

Vic has really moved the dial in upgrading the NSW Jewish community’s level of engagement with the media, politicians and other community leaders. He has acted with great integrity and passion, winning respect and affection from those he has worked with, and bringing great credit to himself and the community he has served. He has set the highest standards for those who will follow him.

We could not have chosen a more professional CEO. Vic brought to community his vast array of contacts, his management of the media, his excellent communication skills and his reputation for integrity.

His enormous reputation for integrity has benefited the community by his capacity to use that aspect of his character to build unity with other communities and earn the trust of government.

The Board has benefited enormously from his work. He will be sorely missed in that role.

The community is immensely grateful to Vic, not just for what he has achieved as a forthright campaigner against antisemitism and Holocaust denial, for the State of Israel and the rights of others, but for the manner in which he has achieved it – with dignity, sincerity and conviction.

Vic is deservedly held in high esteem by all with whom he dealt across the community, within the media and among the bureaucracy and the politicians with whom he engaged on a daily basis.