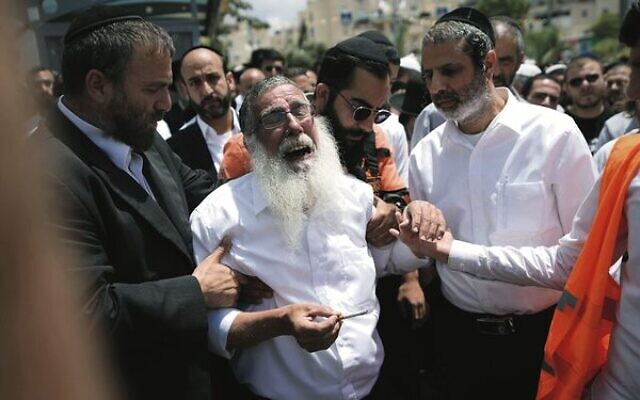 Mourners comfort a man overcome with grief at the funeral processions for the victims of the stabbing attack in Elad. Photo: AP Photo/Ariel Schalit

Two Palestinians accused of killing three men in a deadly terror rampage in Elad last week returned to the scene early on Monday to take investigators through the attack.

Yonatan Havakuk, Boaz Gol and Oren Ben Yiftah, young fathers who together leave behind 16 children, were killed last Thursday when two terrorists attacked several people with an axe and a knife at a central park and a nearby road in the largely ultra-Orthodox city.

Havakuk’s six-year-old son ran to tell security guards that his father was dead and that a terror attack was underway, the child’s uncle told the Kan public broadcaster.

The father of five and car mechanic fought one of the attackers, enabling others to flee to safety.

His widow told Army Radio that her son said his father chose not to run away during the attack.

“He said his father could have run away, but decided to stay.”

The terror attack took place minutes after Yom Ha’atzmaut events had concluded, in the park crowded with Israelis celebrating the holiday.

“It was a very difficult sight, people were sprawled on the road and on the sidewalk from the square to the park, and cries for help were heard from every corner,” Zaka volunteer Aaron Zilberman said.

The victims were laid to rest last Friday. A joint funeral procession began at the site of the deadly attack the night before at Ibn Gabirol Square in the central city.

Ben Yiftah, 35, a driver who was working in Elad for an event at the time of the attack, was buried in Lod. Havakuk, 44, a resident of Elad, was buried in Petach Tikva while Gol, 49, also from Elad, was laid to rest in Jerusalem. Thousands of mourners turned out to pay their final respects to the three men.

Their deaths bring to 19 the number of people killed in terror attacks against Israeli targets since March, in the worst spate of terrorism for years.

As’ad Yousef As’ad al-Rifa’i, 19, and Subhi Emad Sbeihat, 20, were arrested on Sunday after a 60-hour manhunt.

Security officials have said al-Rifa’i and Sbeihat were driven to Elad by Ben Yiftah from the West Bank security barrier, where they are believed to have sneaked into Israel.

A report by Channel 12 on Saturday said that the two killers told Ben Yiftah they were doing urgent renovations at the synagogue on Yehuda Hanassi Street in Elad. When they got close to the synagogue, they attacked him with an axe and a knife, the report said. He fought back, but they overpowered him and killed him.

According to Hebrew-language media reports, Ben Yiftah did not know the pair were in Israel illegally. He had transported them at least 10 times in the past to work in the ultra-Orthodox city, and was unaware of their attack plans.

After allegedly killing Ben Yiftah, the pair headed up Ibn Gabirol Street, where they are suspected of killing Havakuk and Gol, and injuring several others.

The two suspects were found hiding in a bush not far from the scene of the attack. Al-Rifa’i confessed to security forces that he committed the axe attack with Sbeihat, killing the three men.

According to Channel 13, the two have told investigators that they were not members of Hamas and were not instructed by the terror group to carry out the attack, but instead decided on their own to go on the deadly rampage.

The IDF has since mapped out their homes ahead of a potential demolition, and arrested two other suspects who allegedly helped the pair commit the attack.

Meanwhile, police said on Monday they detained 501 Palestinians who were in Israel illegally as part of an ongoing massive arrest sweep.

On Friday, Police Commissioner Kobi Shabtai ordered law enforcement to begin a nationwide operation against Palestinians who illegally enter Israel from the West Bank, and those who assist them.

Israel has also revoked the entry permits of over 1100 Palestinians whose relatives were involved in terror attacks, including several recent deadly assaults, according to security officials cited by multiple Hebrew media outlets on Tuesday.

The comments were made anonymously to a number of outlets including Channel 12 and Walla news. There was no official confirmation from authorities.