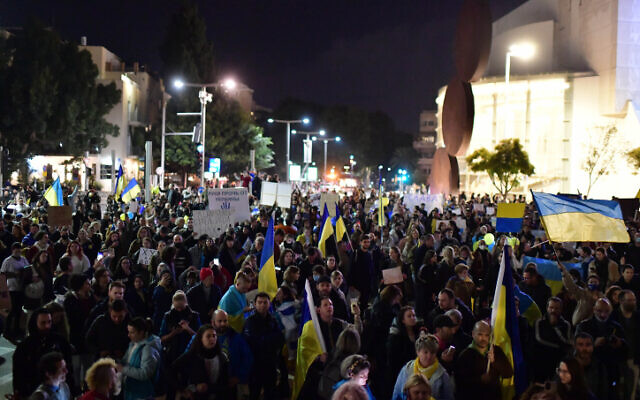 Demonstrators carry placards and flags during a protest march against the Russian invasion to the Ukraine, in Tel Aviv, on February 26, 2022. Photo: Tomer Neuberg/Flash90

Thousands gathered in Tel Aviv’s HaBima Square and Rothschild Boulevard Saturday to protest the ongoing Russian invasion of Ukraine, as well as what they say is Israel’s lackluster response, as the war concluded its third day.

The rally-goers marched toward the Russian embassy building, where police kept them several dozen meters away from the mission.

Vyacheslav Feldman, founder of protest organization Israeli Friends of Ukraine, told The Times of Israel that the demonstration’s first priority was to “stop the war,” and the second was for the Israeli government to take a more active role.

“We’re asking the Israeli government to take a clearer step,” he said. “We want Israel to take a side.”

“Humanitarian assistance is nice, but what Ukraine needs is defensive weapons.”

As Russia attacks Ukraine, Israel has avoided taking a stance aligned too closely with either side. This is believed to be at least partly due to its need to work with the Russian military presence in neighboring Syria.

Israel has expressed concern regarding the invasion and offered humanitarian aid to the Ukrainian people, but Prime Minister Naftali Bennett has avoided condemning Russia or even mentioning the country by name in his statements since the launching of the widespread military operation across Russia’s border. Foreign Minister Yair Lapid issued a clearer condemnation of Moscow Thursday, calling the invasion “a grave violation of the international order.”

Mila and Irena, two new immigrants from Ukraine in their twenties, held signs with Oleg, a Russian immigrant to Israel. Mila and Irena each moved to Israel alone and their families remain in Ukraine.

In particular, the three stressed the abundance of false information circulating in Russia.

“They don’t know the truth of what’s going on,” Irena said, on her estimation of the war’s exposure to the broader Russian public.

While many protesters have roots in Ukraine, Russia, or the former Soviet Union, a significant contingent were Israelis without ties to any of the countries who were simply angered by Russia’s actions.

“I’m here to stand against injustice,” a protester from the latter group said.

At the rally, Ukrainian songs mixed with cheers of “glory to Ukraine” and “Putin is a dick.”

Aalona, who made aliyah from Azerbaijan 32 years ago, told Ynet it was “angering that our government is unwilling to support the Ukrainian people. The fear to clearly voice the injustice is cowardly behavior.”

Viky Lomberg, a Russian immigrant married to a Ukrainian immigrant, told the website: “Here in Israel there’s a democracy, and I’m not afraid to shout against the war. In Russia, the people are afraid of the president.”