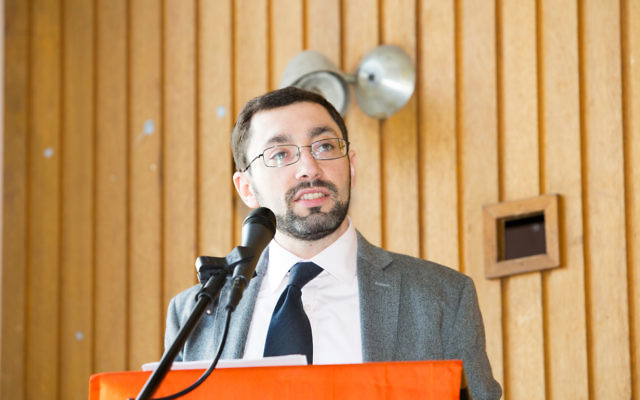 “WORDS themselves can have a violent impact on people and very much can, and do, generate violent consequences.”

That was The Great Synagogue’s Rabbi Dr Ben Elton’s message as the keynote speaker at the 2016 Abraham Conference at Parramatta Mission Fellowship Hall on August 21, to an audience made up of Jews, Christians and Muslims.

After addressing the conference’s theme, “Hate Speech and Violence”, Rabbi Elton told The AJN “anyone who practises hate speech is responsible for the violence that eventuates.

“So we all have to be very careful, and when we hear hate speech we are responsible for calling it out.”

Rabbi Elton said he wanted to break down any “easy distinctions” and gave the following example for the benefit of non-Jewish members of the audience.

“Jews feel threatened and unsafe by the use of anti-Israel rhetoric – and it [can] all spill over into anti-Semitic hate speech.”

When asked if he believes use of hate speech is on the rise, Rabbi Elton said “Yes, I think we are in a disturbing time”.

“In the US [Donald] Trump has used it [hate speech] at rallies, I think (British Labour Party leader) Jeremy Corbyn has used it in the UK and I think Pauline Hanson is using it here in Australia.

“I think she is playing with fire and we should all be aware of this.

“Everyone has the right to free speech, but it’s not a free-for-all – it doesn’t mean you can say hateful things that can lead to violence.”

“I definitely support the stance taken by the JBOD on this and their [Keep NSW Safe] campaign.”

Rabbi Elton said he felt heartened by feedback from the Abraham Conference and what was said by panel members from three faiths.

The NSW Jewish Board of Deputies’ [JBOD] past president, David Knoll, was the panel moderator.

“I think there was a great deal of common ground shown by the panellists, which was very promising to see,” Rabbi Elton said.

“The task now is to widen that feeling.”

The Abraham Conference was presented by Affinity Intercultural Foundation, JBOD, The Uniting Church and the Columbian Mission Institute.