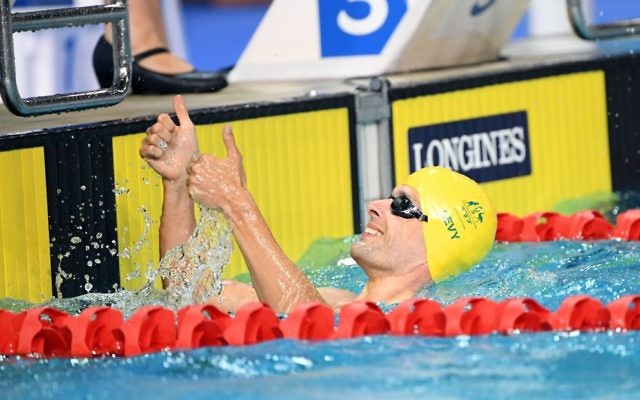 UNTIL Monday night, North Sydney Paralympian Matthew Levy had achieved almost everything he could dream of in swimming – the sport he first took up for health reasons as a child living with cerebral palsy and vision impairment.

The 31-year-old had represented Australia at four Paralympic Games; he’d won two Paralympic gold medals, one silver and three bronzes; and he’d broken several world records at world championships, Australian nationals, and even one at the 2017 Maccabiah Games in Israel.

But there was one thing missing – a gold medal for Australia at the Commonwealth Games – a feat he achieved in his Games debut in the Gold Coast by winning the men’s S7 50m free final by half a body length, in front of a crowd of 10,000 cheering fans.

Earlier in the day he recovered from a slow start in the preliminaries to finish first in 28.68 seconds.

But it was a different story in the final, with Levy leading from start to finish, touching the wall in 28.6 seconds.

It took a moment for the significance of Levy’s triumph to sink in, but when it did, the oldest member of the Australian Swimming Team’s beaming smile, followed by a wave to the crowd and a big thumbs up gesture, showed just what it meant to him.

He told The AJN on Tuesday morning that “the noise from the crowd was deafening – it was absolutely fantastic”.

“I did end up starting quicker in the final, but I wasn’t really worried about what [strategy] I was doing – it was far too noisy for that, with 10,000 people cheering us [Aussies] on!”

Levy said he has competed at Paralympics and world championships, but winning a Commonwealth Games gold rates right up there in his 16-year swimming career.

“It’s very rare to experience a home Games – you don’t get many opportunities to do that.

“To go on to win gold too was something very special. I’m really grateful I was able to get that chance.”