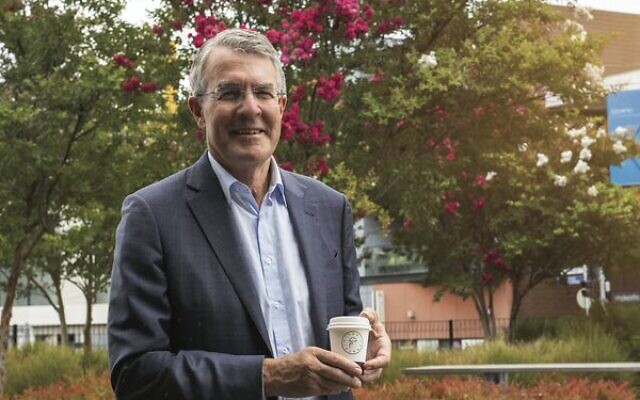 AS Mark Dreyfus strides from his electoral office along Mordialloc’s busy Nepean Highway shopping strip to be interviewed by The AJN over a coffee, he is greeted by locals every few steps, a recognition factor that will be an asset as he campaigns for a sixth term in Isaacs.

In our May 9 encounter, on the first day of pre-polling, there is a sense of the home straight for this Perth-born son of Australian composer George Dreyfus, raised in a family of Holocaust survivors.

A barrister, he turned to politics in 2007 when Labor last came to power. In 2010, he became Australia’s second Jewish attorney-general, after Sir Isaac Isaacs, for whom his bayside seat is named.

In 2019, Dreyfus held a 6.4 per cent margin. “I’m hoping that not only will there be a Labor government but that my colleagues in the caucus will elect me to the ministry … I’m happy to serve in any capacity.”

Asked about the Religious Discrimination Bill, which the government shelved but has now committed to reintroduce, Dreyfus’ legal acumen comes to the fore – along with a withering assessment of the government’s truthfulness.

“[Morrison] is not to believed on just about anything he has said on this subject,” Dreyfus said.

“He first promised to remove discrimination against children in religious schools in October 2018, a promise that he has broken. He renewed that promise in a letter to the Leader of the Opposition on December 2 last year, and we were extremely surprised to see that the legislation, when he finally introduced it, did not contain the removal of discrimination against children.”

In contrast, a Labor government would legislate to prevent discrimination on the grounds of religious belief, “an appropriate addition to Australia’s anti-discrimination laws”.

On continuing Australia’s voting against anti-Israel resolutions in the UN, Dreyfus claimed the Coalition’s voting record remains unchanged from the Rudd and Gillard governments. And on recognising a Palestinian state, he said, “We remain committed to a negotiated two-state solution, which can only come about after agreement is reached between the two sides.”

Present in Elwood in 2007 when then ALP leader Kevin Rudd launched Secure Schools, Dreyfus says Labor fully supports the Coalition’s school security funding and is in ongoing contact with the Jewish community over recurrent funding needs.

Climate action has been a priority for Dreyfus, and he was assistant minister for climate change in 2013, his first cabinet post. Labor would “return to a comprehensive policy approach which we had in place when we were last in office in 2013”, he said, claiming the ALP government’s climate policy was “wrecked by the Abbott government”. He panned the Coalition for its uncertain commitment to net-zero carbon emissions by 2050, and its low targets for 2030.

Dreyfus sees his Jewishness as a way to help others, reflecting, “Tikkun olam [repairing the world] means a lot to me. I would like to leave the world a better place because of the work I do in politics.”