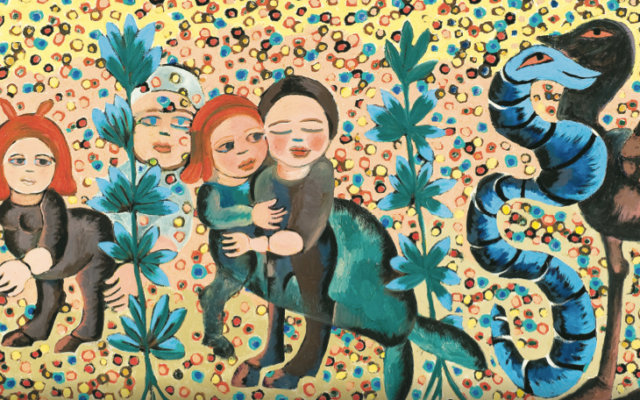 When acclaimed artist Mirka Mora moved from her St Kilda home to a new apartment and studio in Richmond in 2000, she brought a treasure trove of sketches, artwork and memorabilia.

The Richmond building also housed the gallery and home of son William, who recalled the move: “I packed 10 boxes a week for months on end and it took five men two days to move everything.”

Many of Mirka’s previously unseen artworks ended up in her studio and archives, which William has provided to the Jewish Museum of Australia to use in its latest exhibition, Mirka, which opened on February 14 – the first exhibition at the museum since COVID-19 hit Melbourne early last year.

More than 200 works are on display, including paintings, watercolours, painted dolls, letters, sketchbooks and diaries as the exhibition space has been transformed by curator Eleni Papavasileiou into a world that reflects the bohemian spirit of Mirka, who died in 2018, aged 90.

Mirka has exhibited many times at the Heide Museum of Modern Art, but this is the first time at JMA, in collaboration with the William Mora Gallery and drawing on the JMA’s Mirka collection acquired from Heide. “The exhibitions at Heide have been more about the paintings, but the JMA exhibition also looks at her life story,” said William.

The most moving aspect of the exhibition, which brought tears to my eyes, was hearing her voice, drawn from past media interviews, used in the exhibition.

As visitors walk among the exhibits, they will be guided by a soundscape of recordings of Mirka’s memories.

The Mirka exhibition offers a comprehensive picture of the artist’s life and 70-year career, covering all aspects of her work.

Mirka Madeline Zelik was born in Paris in 1928, the daughter of Jewish parents Leon and Celia. In 1942, after the Nazis invaded Paris, 14-year-old Mirka along with her sisters and mother were arrested as part of the Vel d’Hiv round-up, the largest deportation of French Jews during the Holocaust. They were interned at the Nazi transit camp in Pithiviers, northern France and were about to be sent on a journey to Auschwitz when, at the 11th hour, her father Leon – still in Paris where he was in the French Resistance – managed to secure their release. In an interview with The AJN in 2014, Mirka recalled: “I missed Auschwitz by one day! Later, I asked my father, ‘How did you do it?’ He said, ‘Many gold coins.’”

Mirka and her mother hid in the French forests with the Resistance until 1945. After the war Mirka met Resistance fighter Georges Mora – 15 years her senior – and they were married in 1947. Four years later they emigrated to Australia with baby son Phillippe and soon after opened Mirka Cafe in Exhibition Street, bringing a slice of Parisian life to Melbourne. Georges became an influential art dealer and founded Tolarno Galleries in 1967, followed by Cafe Belzac in East Melbourne and Tolarno in St Kilda, which became focal points for many in Melbourne’s arts community.

“Mirka’s style remained the same over 70 years, although it varied in the colours she used,” explained William, whose gallery represents many of her works. “The imagery is steady throughout her work and shows the best of humanity. It was her way of dealing with her horrific Holocaust experiences at a young age. “Mirka created a magical world that was the exact opposite of her Holocaust experience.

People love Mirka’s work, which is basically about finding the goodness in humanity.

JMA CEO Jessica Bram said: “Opening with the magic of Mirka feels a beautifully fitting way for the Jewish Museum of Australia to welcome visitors back after a long and challenging 10 months of COVID-closure. This milestone exhibition and program, dedicated to the remarkable life and legacy of the extraordinary Mirka Mora, radiates with hope, love, joy and resilience.”

The Mirka exhibition will open under COVID-safe conditions including limited numbers with timed ticketed entry, QR scanning and hand sanitisers installed in the gallery space. The Mirka exhibition is at the Jewish Museum of Australia, 26 Alma Rd, St Kilda from February 14 to December 19. Bookings: jewishmusuem.com.au