AN upgraded version of the Iron Dome air defence system has completed a set of “complex” trials simulating threats the system is likely to face at sea, the Defense Ministry and military announced Monday.

The advanced model of the Iron Dome was installed on the Israeli Navy’s new Sa’ar-6 corvettes, which are tasked with guarding the natural gas platforms off Israel’s coast as well as its shipping lanes.

The tests, which the Iron Dome completed successfully, represented “an important milestone in the operational ability to protect the strategic assets and vital interests of the State of Israel,” the Defence Ministry and Israel Defense Forces said in a joint statement.

In a video released by the ministry (above), the Iron Dome was seen intercepting a small unmanned aerial vehicle and a rocket launched toward the ship during the exercise. The ministry said the system was also pitted against cruise missiles during the trials, without detailing further.

The announcement comes after Israeli air defences failed to down a small drone that entered the country from Lebanon on Friday, which the Iran-backed Hezbollah terror group claimed responsibility for launching.

It also follows a number of recent drone attacks on American forces in Iraq and targets in the UAE, including a strike on Abu Dhabi last month claimed by Yemen’s Houthi rebels that left three dead.

Defense Minister Benny Gantz hailed the successful test in a speech Monday, saying, “It gives us vital freedom of action against Iranian proxies in the region and the evolving means at their disposal.”

On Sunday, addressing the Munich Security Conference, Gantz warned of rising Iranian aggression in the Middle East, and again accused Iran of carrying out an attack on the Israeli-owned Mercer Street cargo ship this summer with armed drones that killed two civilians, a British national and a Romanian national. 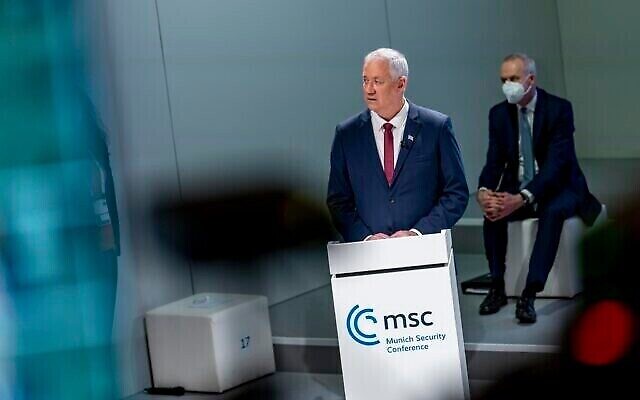 Commending the trial, Prime Minister Naftali Bennett hailed “the development of advanced technologies that enable us to protect our citizens.”

“The system will be an important layer in Israel’s security envelope,” Bennett added.

The Iron Dome tests were conducted off the coast of central Israel, with representatives from the Israeli Air Force’s Air Defense Command and the navy taking part.

“The trial examined a number of scenarios that simulate existing and future threats the system may face during a conflict,” the Defense Ministry said. 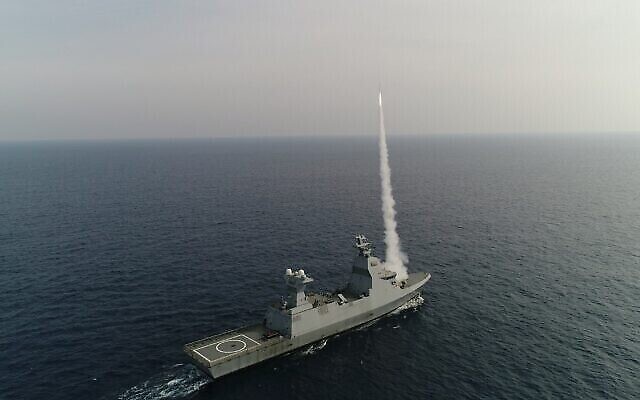 An Iron Dome missile defense system fires an interceptor from a Sa’ar-6 corvette, at a target during an exercise in early 2022. (Defense Ministry)

Last year the Defense Ministry held a similar series of tests on a more advanced model of the Iron Dome, though not mounted on a Sa’ar-6. It also conducted an unprecedentedly complex air defense exercise, in which the system was proven effective against not only the rockets, mortar shells and drones that it had already been used to intercept, but also against cruise missiles — a major leap forward in its capabilities.

The Israeli Air Force maintains a multi-tiered missile defense system, which is meant to protect the country from aerial threats.

The lowest layer of Israel’s multi-tiered missile defense system is the Iron Dome. The middle tier is the David’s Sling system, which is designed to shoot down medium-range projectiles. The longest-range systems are the Arrow, designed to intercept large ballistic missiles, and the American-made Patriot system, which is used to shoot down aircraft.

However, even with the full complement of missile defence systems, defence officials warn that they will not offer a hermetic seal in the case of all-out war, and some rockets will inevitably slip past the defences.