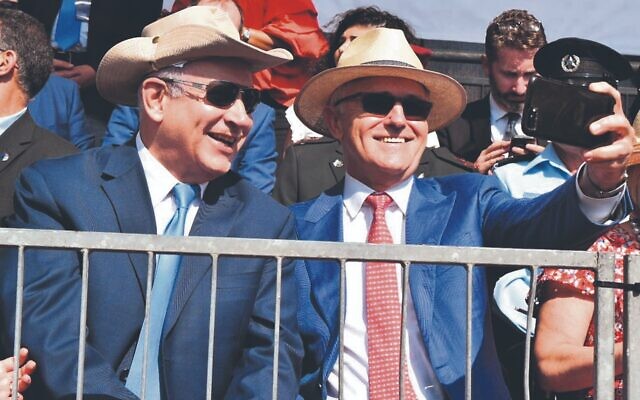 Firm friends. Benjamin Netanyahu and Malcolm Turnbull at the Battle of Beersheba centenary re-enactment in October 2017.

MKs voted on Sunday by a wafer-thin 60-59 in favour of the new government, made up of right-wing, left-wing, centrist and Islamist parties that came together to oust Netanyahu after 12 years of consecutive rule as prime minister.

The swearing-in marked the end of a tumultuous period of political deadlock, which had seen Israelis go to the polls an unprecedented four times in two years.

Speaking exclusively to The AJN, Turnbull – who hosted Netanyahu in Sydney while he was prime minister in 2017, and also joined him in Israel for the centenary of the Battle of Beersheba – said, “Whatever you think about his politics – and I recognise he’s been a polarising figure – he is a very convivial, very engaging charismatic person. And he has used all of his personal charm to secure wider support for Israel around the world.”

Turnbull added, “He’s a tough, Machiavellian politician – he couldn’t have survived as long as he has without being so.

“Bibi was always a good friend to Australia and at different times provided us with considerable assistance on security matters.”

Federal Liberal MP and former ambassador to Israel Dave Sharma told The AJN, “Netanyahu has left a legacy of a more secure and more prosperous Israel. And he made history by becoming the first sitting Israeli prime minister to ever visit Australia, a trip I was honoured to accompany him on. He leaves a legacy of stronger and closer Israel-Australia ties.”

Congratulating Bennett and alternate prime minister and foreign minister Yair Lapid, Sharma described both men as “great friends of Australia”, adding he looked forward to working with them “on our many shared interests”.

Federal Labor MP Josh Burns told The AJN, “I have no doubt that their government will continue to strengthen Australia’s warm bipartisan friendship with Israel.

“May their leadership of an unlikely cross-partisan coalition usher in an era of unity and harmony for the Israeli people.

“And may it be one that grasps the opportunity to build momentum towards lasting peace.”

Noting, “The new government is the most politically broad in Israel’s history,” Executive Council of Australian Jewry president Jillian Segal said it also reflects the diversity of Israeli society. “It includes an Ethiopian-born minister for immigration, a minister with a physical disability, a former IDF chief of staff, Israel’s first openly gay party leader, a minister from the Arab community and immigrants from the former Soviet Union.”

She added, “We trust that stability will be restored to Israel’s political system and public sector and that the new government will work with wisdom, skill and unremitting dedication and devotion for the unity of the Jewish people and the security and welfare of the people of Israel.

Expressing his hope that the coalition “will deliver on its promise to govern for all Israelis”, Zionist Federation of Australia president Jeremy Leibler said, “It will no doubt require pragmatism and a willingness to compromise for the benefit of all citizens of the State of Israel.”

Noting Lapid had been “instrumental in establishing this government” and “his vision of a centrist party working with both the right and left in government has come to fruition”, Leibler added, “Like the new Israeli government, the Australian Jewish community consists of a broad range of religious traditions, and holds political views stretching all the way across the left-right continuum. But we are united in wishing the new government success in addressing the many challenges facing the State of Israel.”

Stating, “This coalition includes both strong personalities and idealistic parliamentarians who will bring a diverse range of skills and initiatives to the table,” Australia/Israel & Jewish Affairs Council (AIJAC) national chairman Mark Leibler commented, “We very much hope this new government will succeed in putting an end to the political stalemate which has afflicted Israel in such a frustrating way over the past two years.”

Acknowledging that Netanyahu “has overseen enormous advances for Israel in the diplomatic and economic fields”, AIJAC executive director Colin Rubenstein added, “For these achievements, he deserves the gratitude of all friends of Israel – and of course he appears to have no intention of leaving the political stage.”

Not everyone, though, had such a positive view of the former prime minister. Liam Getreu, executive director of the New Israel Fund Australia said Netanyahu’s “legacy was dominated by relentless delegitimisation of human rights organisations, anti-democratic and racist laws … as well as attempts to undermine the justice system for personal gain”.

He added, “Jews around the world and so many Israelis – Jews and Arabs alike – have an abiding hope that this new government will choose to put Israel on a path of justice, equality and democracy.”