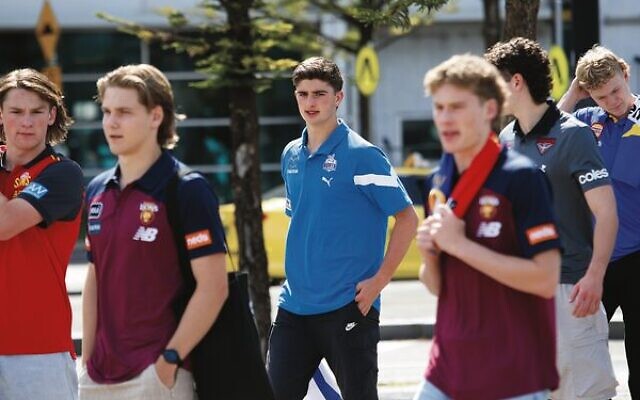 A HISTORY-MAKING moment for young athlete Harry Sheezel was soured over the weekend when trolls directed antisemitic slurs towards him on social media prior to his drafting by the North Melbourne AFL club.

Sheezel, a Mount Scopus Memorial College graduate, was pick three at the AFL draft on Monday night, becoming the first Jewish player drafted since 1999 and the first ever drafted in the top 10.

The offending comments were posted under an article about the 18-year-old on The Age’s Facebook page on Saturday. They included, “Hope he has enough gas in the tank,” and “Hopefully a team sponsored by a gas company pick him up. Also his team-mates should not expect him to be shouting end of season drinks.”

Several other antisemitic stereotypes and insults were posted under the article, which has since been deleted from Facebook.

“It’s disgraceful and disappointing that people on social media took such a lovely story and turned it into an excuse for vile antisemitic abuse,” he told The AJN this week.

“We normally block comments on stories that mention the religion or race of a person,” he explained.

“On this occasion, unfortunately, the story was posted at a busy time – the evening of the [Victorian] state election – and the usual practice was overlooked.

“The issue was drawn to our attention, and the situation was rectified. For that, we apologise to Harry Sheezel and the broader Jewish community.”

The Jewish Community Council of Victoria (JCCV) met with The Age to discuss the matter.

JCCV president Daniel Aghion accepted Bachelard’s apology, adding, “The Age took the posts down after the JCCV informed the newspaper of the comments. But the page should have been properly moderated, and the comments should never have been published in the first place.”

He said the JCCV will help The Age understand “the distress caused by the publication of these comments and to make a plan to avoid similar situations in the future”.

Sheezel addressed the antisemitic comments during a press conference on Tuesday morning, saying, “I think I’m handling it fine. Not really letting it get to me.

“I think the right action will be taken against those people that made the comments and I just try to get along with my footy.”

Prior to the draft, he told News Corp, “I think they’re just ignorant and uneducated and they’re probably not sure about the impact that stuff can have.”

He told The AJN on Tuesday, “I’m definitely hopeful that this antisemitism stops. I don’t think there’s a place for it in today’s society, and I stand by the comments I’ve made earlier about that.”

The AFL said in a statement prior to the draft, “To denounce a young man on the eve of realising his dream of being drafted to the AFL is deplorable and unacceptable.

“The AFL Integrity Department is investigating as to whether those who made comments are genuine social media accounts and if they are club members.”

“The community is behind him and we look forward to following his career,” Burns told The AJN.

Executive Council of Australian Jewry co-CEO Alex Ryvchin said that incidents like this “remind us of the hatred, ignorance and malice that exist in our society”.

“It is sad that a moment of immense pride for our community should be in any way diminished but hopefully it forces wider society to take notice of this problem.”

Ronnie Lewis, president of the AJAX Football Club, told The AJN, “We’re deeply offended, horrified and saddened that this behaviour has happened towards our community.

“We hope that those that have offended will be apprehended and punished accordingly.”

Sheezel joins a small list of Jewish players to be drafted into the AFL, including Ezra Poyas (Richmond and Melbourne) and Julian Kirzner (Essendon, Carlton and North Melbourne).