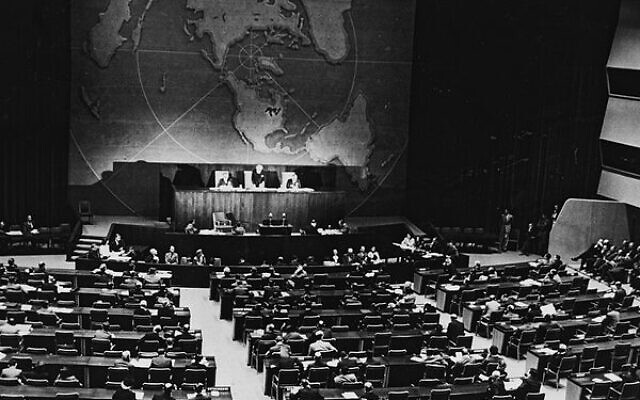 Regular readers of The AJN would be forgiven for thinking that since I left The AJN in March, I’ve been in the employ of a shadowy agency known as the Milestone and Landmark Corporation … and that every time I successfully introduce one of those words into public discourse, I receive a kickback.

Let’s consider the evidence. Less than a month ago, I penned a column in these pages hailing the 105th anniversary of not one but two “milestone” occasions – the Australian Lighthorse Charge at Beersheba and the Balfour Declaration pledging British support for the establishment of a Jewish homeland in the then Ottoman outpost known as Palestine.

A short while earlier, I’d put pen to paper for another op-ed in which I recalled the “landmark” First Zionist Congress, held that week 125 years ago.

And then, back in July, there was the 100th anniversary of the “landmark milestone” that was the League of Nations establishing the British Mandate.

Throughout all of these columns, no doubt, I mentioned that these “milestones” and “landmarks” were a prelude to the ultimate “landmark” and “milestone” … Israel’s 75th birthday, which we’ll be celebrating next year.

But we’re not there just yet. And with Chanukah around the corner, I need to earn some extra commission from the corporation to pay for all those doughnuts and presents. Hence, there’s one final “milestone” I’m privileged to write about before 2022 draws to a close. And it won’t surprise you to learn that – like all the others – this one was truly a “landmark” occasion in Zionist history, and consequently a pivotal episode in the creation of the State of Israel.

We’re talking, of course, about the 75th anniversary of the United Nations vote on the partition of Palestine, which took place on November 29, 1947. Accepted by the Jewish world, rejected by the Arab nations, six months later David Ben-Gurion declared independence, and the newly born State of Israel celebrated its very first Yom Ha’atzmaut.

But back to the partition resolution. From a Zionist perspective, it was of course, momentous. But from the standpoint of Australia, it was also rather significant.

The man who helmed the committee that recommended the partition proposal was Australian statesman at the UN Herbert Vere “Doc” Evatt. Such was his pride in Israel’s subsequent foundation that he hailed it in his memoirs as “a great victory”.

But Australia and Evatt’s role in the establishment of the Jewish State didn’t end there.

When Evatt’s proposal hit the floor of the UN General Assembly 75 years ago next Tuesday, Australia was the very first country to vote in its favour.

And two years later, when Israel joined the family of nations as a member of the UN, Evatt – who would later become leader of the ALP – was serving as president of the General Assembly and oversaw its admission.

As Australians then, we can be incredibly proud of our country’s invaluable involvement in the history of modern Zionism.

If the Australian cavalry at Beersheba facilitated the shidduch between the Jewish people and what would become the Jewish homeland, Doc Evatt wrote the ketubah and Australia was the first country to sign it as a witness.

Here in Victoria we’re planning a whole host of commemorative events and initiatives to take place in the coming year, with details unveiled next week.

But before next Tuesday, I just want to reflect on the Tuesday just gone – November 22, 2022.

As noted earlier, 75 years ago the Arab world rejected the partition plan, and Israel and her neighbours existed for the next half-a-century in a state of perpetual hostility.

The 1970s saw the first hints of a thaw when Menachem Begin made peace with Egypt, a move that cost Egyptian president Anwar Sadat his life. The early ’90s then saw relations forged with Jordan and the PLO, a move that cost Israeli prime minister Yitzhak Rabin his life.

And then, two years ago, the United Arab Emirates, along with Bahrain, Sudan and Morocco signed the Abraham Accords. No leaders since, thank God, have yet paid the ultimate price for extending the hand of friendship.

But that friendship is certainly bearing fruit. On Tuesday, we were privileged to host Abdulla Al Subousi, the Emirati ambassador, as guest speaker at our annual assembly.

Just four years ago, when we celebrated Israel’s 70th birthday, writing such a sentence would have been inconceivable.

How wonderful that as we mark 75 years since the UN resolution, nations that weren’t just disunited at the time but were downright hostile are finally coming together.

Who knows if I’ll be asked to write a column when Israel 100 is upon us? But hopefully by then, the sentence I mentioned that was recently inconceivable won’t just be a welcome addition to my op-ed, it will actually be so much the norm it won’t even be worth mentioning.