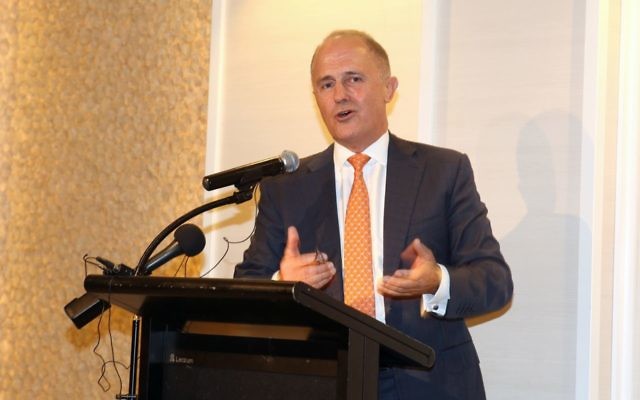 COMMUNICATIONS Minister Malcolm Turnbull has assured Australia’s Jewish roof body he is not advocating that the issue of changing Section 18C of the Racial Discrimination Act (RDA) be resurrected.

The confirmation came after Turnbull appeared on Network Ten’s The Bolt Report on Sunday and said he was “very comfortable” about the words “insult” and “offend” being removed from the legislation.

Stating that “the government’s position is to leave it as it is”, Turnbull said the debate around the legislation “honestly ran off the rails”, adding, “I think there is plenty of scope in the Act as it stands for there to be debate.

“There was a very general consensus that – well, a broad consensus, among lots of interested groups and stakeholders, that the words ‘insult’ and ‘offend’ could be removed, leaving the words ‘humiliate’ and ‘intimidate’,” Turnbull said.

“I was very comfortable about that. I didn’t think that would have any sort of negative impact.”

The AJN understands Executive Council of Australian Jewry executive director Peter Wertheim has spoken to Turnbull and “he has confirmed that he is not advocating that this issue be resurrected”.

“I completely reject the suggestion that there was ever any consensus that the words ‘offend’ and ‘insult’ should be deleted from Section 18C,” Wertheim added.

Liberal Senator Cory Bernardi, one of the co-sponsors of Family First Senator Bob Day’s proposed bill which seeks to remove the words, told The AJN this week: “An appropriate balance needs to be restored between tackling racial discrimination and preserving freedom of speech. Removing just two words – ‘offend’ and ‘insult’ – from Section 18C will help restore that balance.

“For someone to be taken to court for merely offending someone else goes too far.”

Stating that it would still be unlawful for someone to commit an act if it humiliates or intimidates another person or group of people, Bernardi added: “Protections against racial discrimination will remain in place.”

But Wertheim hit back at the proposal, saying, “The absence of those words would not have altered the ­outcome of the Andrew Bolt case, because he was found to have contravened all four of the criteria in Section 18C – ‘offend’, ‘insult’, ‘humiliate’ and ‘intimidate’.”

Bolt was found guilty of breaching Section 18C in 2011 after nine Aboriginal people took the columnist to court over articles he had written that they claimed implied light-skinned people who identified as Aboriginal did so for personal gain.

“Senator Day and his supporters have failed to explain what injustice they think would be cured by the removal of ‘offend’ and ‘insult’,” said Wertheim.

In 2003, Holocaust denier Fredrick Toben was successfully prosecuted under Section 18C, which deems it unlawful to “offend, insult, humiliate or intimidate” a person or group based on race, ethnicity or colour.

In August last year the Abbott government scrapped its proposed wind-back of the RDA following pressure from ethnic groups, including the Australian Jewish community.