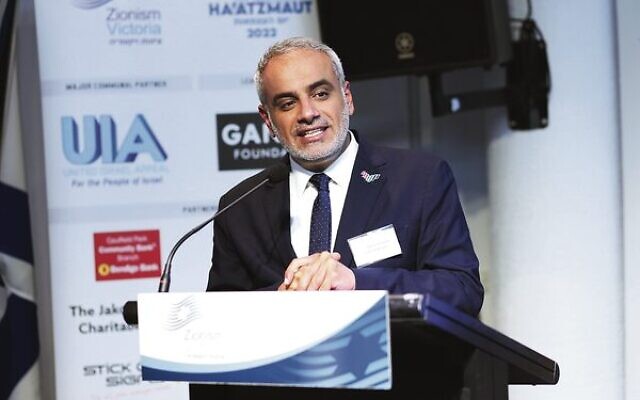 IN his first public address to a Jewish community organisation in Victoria, United Arab Emirates ambassador Abdulla Al Subousi praised diplomatic, economic and cultural ties between his country and Israel.

Addressing the Zionism Victoria (ZV) Annual Assembly on Tuesday, the envoy enthused, “It’s really a pleasure to be here with you tonight.” He said growing trade relations between the UAE and Australia have been inspired by trade ties between his country and Israel.

“The Jewish people are famous for being entrepreneurs,” he noted, adding also that “the cultural ties are amazing”, with a significant increase in Jewish visitors to Abu Dhabi and Dubai since the Abraham Accords in 2020.

In his report to the AGM, ZV president Yossi Goldfarb spoke about threats to Jews and Israel from left and right-wing extremists, describing the University of Melbourne Student Union’s anti-Israel resolution as “scandalous, belligerent, antisemitic”. He recounted ZV’s petition to Glen Eira Council to adopt the IHRA definition. Paying tribute to former ZV executive director Jean Katzen, he welcomed her successor Zeddy Lawrence, and noted ZV “has been much more active in the media and social media”. And Goldfarb committed ZV to correcting a “gender imbalance” on its board.

ZV’s Community Volunteer Award was presented to Ian Samuel for more than 40 years of service with multiple roles in Australia’s Zionist community. The communal stalwart attributed his marathon involvement to “my love for Israel”.

With the state election this weekend, Zionist Federation of Australia president Jeremy Leibler emphasised, “We are incredibly blessed in this state … to have both a government and opposition that are deeply, deeply committed to our community and the State of Israel.”