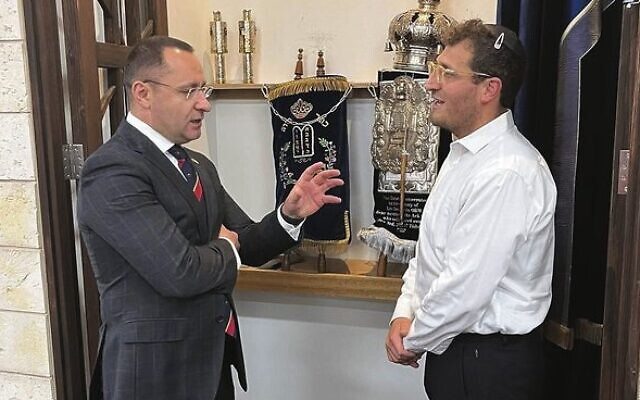 The ambassador gave a Q&A discussion, hosted by chief operating officer of the Jewish Community Council of Victoria (JCCV) Naomi Levin about the current situation in Ukraine.

During their discussion the ambassador explained that over $1 trillion worth of damage has been caused by the ongoing war between Russia and Ukraine, and that it will take two generations to rebuild.

He said, “Five hundred hospitals have been destroyed,” but still thanked the people of Australia for their ongoing support of Ukraine.

With pride, Myroshnychenko also said, “Ukrainian people are united now because I think this is what the Russians have underestimated; they didn’t expect that kind of resistance coming from Ukraine.”

He added, “The biggest danger out there has united all the people, now there is unity and it’s unbelievable. We can see a birth of a true political nation.”

After the discussion, the ambassador stayed for the Shabbat service as well as a Shabbat dinner.

Rabbi of the ARK Centre Rabbi Gabi Kaltmann said it was an “absolute honour” to host the ambassador.

“We were left in awe of his passion and tireless work for his people and country. The ambassador was extremely generous with his time, discussing the current situation, the Australia government assistance and the history of the Jewish community in Ukraine,” he said.

Rabbi Kaltmann added, “He is a true warrior doing his president and people proud!”