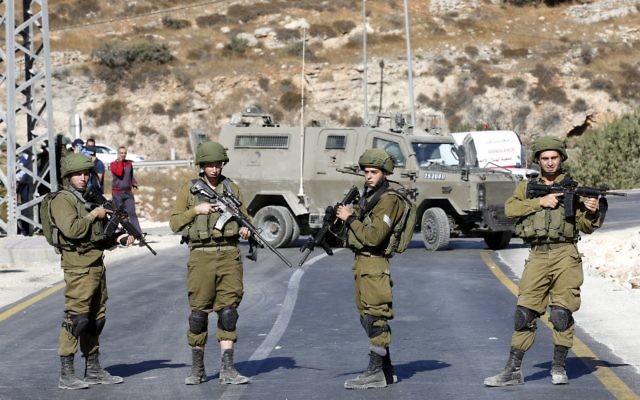 The knives are drawn against Israelis again. Terrorists have been renewing attacks, keen to convince citizens of Israel that a year on, they still can’t breathe easy.

In just over a week, the current wave of terror will pass the one-year mark, and some of its perpetrators pulled out all the stops over recent days – and tried to send out a strong message that the violence isn’t over.

In the worst of the injuries sustained in the renewed attacks, a 38-year-old Israeli woman is in a serious to critical condition in a Jerusalem hospital, after a terrorist stabbed her in Jerusalem’s Old City on Monday. As of press time the woman, a police officer, was on a respirator, and a police colleague who was with her during the attack is recovering from moderate injuries.

In what Israeli Police spokesman Micky Rosenfeld called a “horrific” attack, a Jerusalem Palestinian man followed the two police officers, who were making their way to work, and then stabbed them in the neck.

The first victim defied his own injuries to shoot the attacker while he was in the process of attacking the second victim, the policewoman. “After he was stabbed he managed to open fire at the attacker, preventing him from continuing to stab anyone else,” Rosenfeld told The AJN, adding that this probably allowed the second victim to live through the attack. “If he wouldn’t have responded quickly in the way he did she wouldn’t be alive today,” Rosenfeld commented.

He said that he cannot predict where the violence is headed, but said that police are on high alert, especially with the Jewish holidays around  the corner. Prime Minister Benjamin Netanyahu said in Sunday’s cabinet meeting that in security terms “the risk threshold has risen” ahead of the holidays.

Analysts say that it is hard to predict whether attacks will intensify, but some think that both the Israeli and Palestinian leaderships can help to keep things under control. Gilead Sher, a former chief of staff in the Israeli Prime Minister’s Office and a former peace negotiator, told The AJN: “I think that a combination of effective counter-violence measures by Israel and very tight collaboration from the Palestinian leadership could eventually cause this violence to subside.”

The recent respite in attacks came to an abrupt end last Friday, when a Jordanian man ran at an Israeli border police officer just outside Jerusalem’s Old City, trying to stab her. The man carried out his attack on a busy walkway as families with children strolled past, and the police officer was only saved when a police colleague fatally shot the attacker.

Less than an hour later, two Palestinians attempted to ram their vehicle into a bus stop at the Elias junction, near the West Bank settlement of Kiryat Arba. The attack was halted when security forces killed one terrorist and wounded the other, but three Israeli teenagers had already been lightly wounded.

Also last Friday, a Palestinian man carried out a stabbing attack in Hebron, slightly injuring a soldier, and another Palestinian hurled a stone and a tin of paint at a bus travelling towards the settlement of Ma’ale Adumim. The attacker in the bus incident fled, and the driver’s control meant that he managed to safely stop the vehicle.

On Saturday, a Palestinian man in Hebron walked slowly up to a soldier and handed him a piece of paper to distract from what he was about  to do: he pulled a knife and started frantically trying to stab the soldier. Other soldiers pulled the attacker to the floor and fatally shot him.

On Sunday, a Palestinian man entered the settlement of Efrat and stabbed a soldier, inflicting significant injuries. On Monday, aside from the serious Jerusalem incident, there was an attempted stabbing in Hebron. On Tuesday, a Palestinian man tried to stab a soldier outside of Hebron but was shot before he could do so, and two soldiers were injured by rioters in a refugee camp, where they were carrying out a raid.

Israel’s security headache in recent days has not been limited to Jerusalem and the West Bank. Hamas tried to fly a drone from Gaza to Israel on Tuesday. Israel intercepted the drone, but it is viewed as a sign of the increasingly sophisticated equipment that Hamas militants are using. Israeli military spokesman Peter Lerner noted: “Hamas has been developing its drone capabilities, especially in the last two years.” And he said that the launch of the drone “proves once more that Hamas continues to invest in tools of terror and not the true needs of the people of Gaza”.