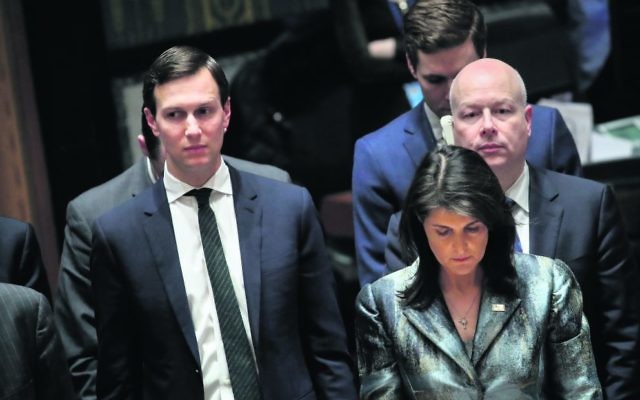 Israel Television News aired a report on Saturday detailing what could be the biggest shake-up in the Israeli-Palestinian conflict for decades.

The US isn’t only poised to say that just one in ten refugee claims is genuine but also wants to take the “right of return” for Palestinians to Israel off the table in all future peace talks, according to the report.

It appeared to corroborate earlier rumours that White House Senior Advisor Jared Kushner had been trying to persuade Jordan to declare that the two million Palestinians who live there are not refugees.

Kushner is said to have discussed the subject of Palestinian refugees in internal White House emails. According to Foreign Policy magazine he wrote: “Our goal can’t be to keep things stable and as they are. … Sometimes you have to strategically risk breaking things in order to get there.”

Many Israelis and supporters of the Jewish State abroad have long been critical of the fact that there are said to be millions of Palestinian refugees.

They object to the fact that, in an exception to the international norm, UN rules mean that Palestinian refugees pass their status from generation to generation.

This means that the number of refugees continues to grow, and while there were 700,000 back in 1949, there are now said to be well over five million. UN rules also mean that Palestinians, unlike most others, keep their refugee status even if they become a citizen of a state.

Ron Prosor, former Israeli ambassador to the UN, lauded the anticipated announcement, along with reports that America wants to drastically reduce the work of the UN’s refugee agency, UNRWA. He said that America will be taking an “important step in making peace possible.

Naftali Bennett, leader of the Jewish Home party, said that cancelling “the fictitious ‘right’ of return and of the fictitious refugee-by-descent status ”would be a “courageous and just step.”

If the expected American plan is confirmed, it will reflect a change that many Israeli politicians have long demanded. Israel’s Defence Minister Avigdor Lieberman, who unlike Bennett does support a peace deal with the Palestinians, said last year that Israel will “not agree to the return of a single refugee” in such a deal.

But among Palestinians the issues of the “right of return” and refugees are very emotive, and the angry reaction to a US announcement could dwarf the anger that was seen last December when America recognised Jerusalem as Israel’s capital.

The Palestinian cabinet released a statement criticising the Trump administration for a “misguided decision,” claiming that such “irresponsible action” will “deteriorate the dire conditions of Palestinian refugees, create chaos in the region, and destroy all hopes for a fair and a just solution to the refugees’ issue.”