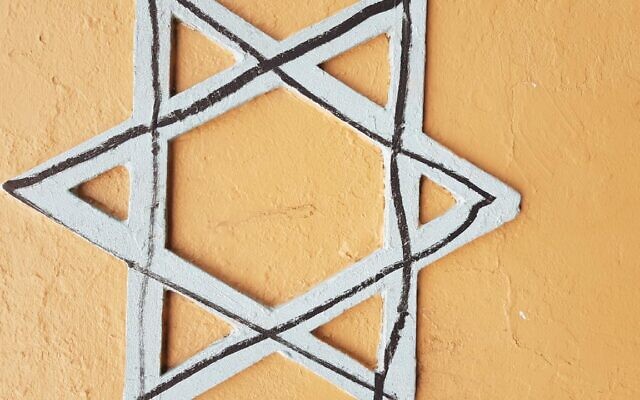 The Star of David defaced with a black marker.

A TASMANIAN rabbi was uplifted by the support he and the Launceston Synagogue community have received from across northern Tasmania after the historic shule’s Magen David (Star of David) was defaced last week.

Worshippers turned up on January 16 and found the Magen David – on the heritage-listed shule founded in 1844 and the second-oldest synagogue in Australia after Hobart’s – had been vandalised with a permanent black marker.

Rabbi Yochanan Gordon, rabbi of Chabad of Tasmania, told The AJN this week that the clean-up required to fix the Magen David would be intensive.

Although the shule has been vandalised twice before in the past eight months, this was the first attack on a patently Jewish symbol on the building.

“It was obviously maliciously done – either out of pure ignorance or out of antisemitism,” said Rabbi Gordon.

However, he said the support received from Launceston locals in the wider area has been encouraging.

“We’ve had many, many people of the greater Launceston community being very supportive of what we do, and we get [messages] all the time about how much they support us and support Israel,” he told The AJN.

“We have a very, very strong [Tasmanian] community that loves Jewish things, and the number of people from the greater community who contacted us with their shock is quite phenomenal.

“People have contacted us to see how we’re doing after this malicious attack,” he said.

Anti-Defamation Commission chair Dvir Abramovich said, “We will not let the bigots win. Any desecration of a house of worship strikes at the heart of who we are as a community, and is an attack on every Australian.”

He added, “It is disturbing that anyone would want to deface such a beautiful symbol with an act of hate … But this cowardly behaviour, which only seeks to sow fear and intimidate, will not deter Jews or any other religious group from practising their faith.”