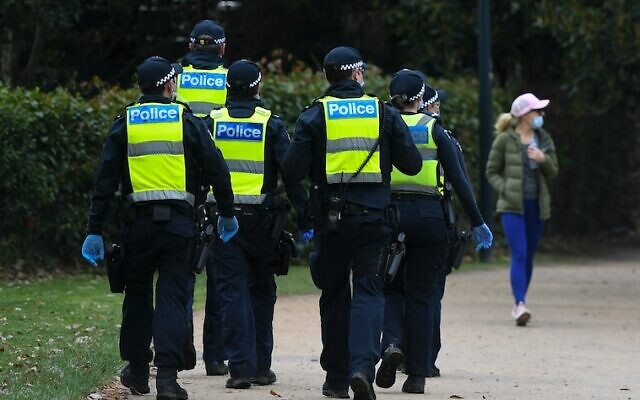 COMPLAINTS that some members of Victoria Police acted in an aggressive and intimidating manner towards Jewish residents of Caulfield and St Kilda East who were acting perfectly lawfully over Rosh Hashanah have been raised with the force.

Quite aside from events in Ripponlea where officers took action against an illegal minyan that breached lockdown restrictions, there were numerous reports of members of the community claiming to have been accosted and interrogated while walking innocently down the street, and of being forced to disperse and threatened with fines while attending approved activities.

One person posted online, “We were harassed by police when walking past a shofar blowing. We were masked and socially distant. They took my husband’s name and address … They got out the car with their lights on and approached people telling them to move on. Some people left. They took down names of people who didn’t.

“Then we continued to walk up and down the street so we could hear the shofar. The police got back in their car and circled the block at least four more times. My kids were so frightened they didn’t want to hear shofar anymore.”

Another posted, “Their behaviour was disgraceful. Terrifying Jews and making them scared to walk the streets.”

A third said, “The sad thing for me is that my grandchildren have an impression that the police are out to get Jews! They saw their parents pulled aside by police as they walked up Glen Eira Road to hear the shofar. They were not breaking any of the regulations but were targeted because their father wore his tallis.”

However, not all officers were reportedly so heavy-handed. One poster said there were “small numbers of police that were very threatening and ignorant of approval that had been given for shofar blowing. Other police enforcement were caring and thoughtful”.

Responding to the concerns, members of the Rabbinical Council of Victoria (RCV) met with senior officers yesterday to pass on “community sentiments, both positive and negative”.

“Police took the feedback on board,” the RCV said, adding, “We also asked them to reiterate cultural sensitivity to their patrols in anticipation of Yom Kippur.”

However, the RCV also said, “We realise that there may have been some misunderstanding among members of our community regarding the DHHS dispensations for shofar blowing on Rosh Hashanah and this may have led to disquiet amongst those who thought they were following regulations, yet had negative interactions with police.”

Member for Caulfield David Southwick told The AJN he had also received reports of officers acting in an overly aggressive manner, and encouraged people to let him know of their experiences so he could raise them with the force and the Minister for Police.

Commenting on Facebook, Rabbi Yaakov Glasman said, “Ordinarily, Victoria Police do an outstanding job and are rightfully applauded and over Rosh Hashanah the outdoor shofar blowings went very smoothly in most suburbs.

“However, on this occasion in the Caulfield area they have in my view fallen short of their responsibility to the community and should apologise accordingly.”

He stressed he was “not referring to the police response to the clear violations of the current health regulations in the form of illegal prayer services,” adding, “All Victorians must abide by the law even if they vehemently disagree with it.”

The RCV says members of the community are welcome to share their experiences with Victoria Police at www.police.vic.gov.au/compliments-and-complaints.

Statement to The AJN from Victoria Police:

“Throughout this week, Victoria Police has been engaging with the community along Glen Eira Road, Ripponlea, providing reassurance and ensuring ongoing compliance with the Chief Health Officer’s directions.

“Local police have a wonderful relationship with the local community and met with community leaders yesterday to collaboratively work through issues raised.

“Victoria Police has not received any official complaints.

“Police will continue to engage with local community leaders and organisations such as the Rabbinical Council of Victoria to ensure our response is culturally sensitive.

“Victoria is home to a vibrant multicultural community and all Victoria Police members are expected to display professionalism, respect, and cultural sensitivity in all interactions with the community.”