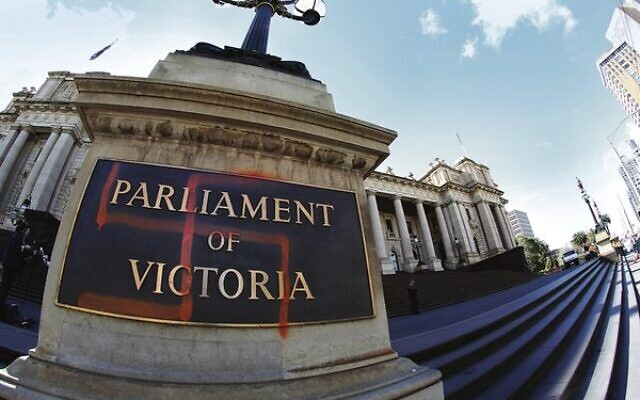 Victoria's Parliament House was daubed with a Nazi swastika in 2012. Photo: Peter Haskin

VICTORIAN legislation to ban public displays of the Nazi swastika passed into law this week, the first in any state or territory.

The Summary Offences Act was amended to make it a criminal offence to deliberately display the Nazi swastika in public, with penalties of up to almost $22,000 or a year’s imprisonment or both.

The new law will come into effect after six months, following a public education campaign to distinguish between the Nazi symbol and ancient swastikas culturally significant to some faith communities.

State Attorney-General Jaclyn Symes stated, “It’s a proud moment to see these important laws pass with bipartisan support – I’m glad to see that no matter what side of politics, we can agree that this vile behaviour will not be tolerated in Victoria.”

Multicultural Affairs Minister Ros Spence added, “These laws are part of our unwavering commitment to challenge antisemitism, hatred and racism wherever and whenever they occur.”

Jewish community leaders welcomed the landmark passage of the bill. Jewish Community Council of Victoria (JCCV) president Daniel Aghion said, “The JCCV sincerely thanks the Victorian government, particularly Attorney-General Jaclyn Symes and Minister for Multicultural Affairs Ros Spence, for engaging and working with the JCCV in drafting this new law.”

Noting the new law has the support of the Coalition and the Greens, Aghion thanked Shadow Attorney-General Michael O’Brien, who had referred to JCCV information in urging the government to pass the law with immediate effect.

Aghion paid tribute to Deputy Liberal leader and Caulfield MP David Southwick “for first raising the concept of banning the Nazi swastika within the Victorian Parliament”.

Southwick reflected to The AJN, “After years of campaigning for these laws within our community, it is great to see them finally become a reality. These new laws can’t come soon enough when hatred is on the rise and the Nazi symbol is used to target us. These laws will send a clear message that there will be consequences if you seek to use Nazi symbols for evil.”

Observing that “this Parliament has declared that the symbol of Nazism will never find a safe harbour in our state”, Anti-Defamation Commission chair Dvir Abramovich, who conducted a five-year campaign for a swastika ban, described it as a tribute to “our valiant Diggers who fought to vanquish Hitler, the six million Jews and millions of victims murdered by the Third Reich, and the triumphant survivors who rebuilt their lives here”.