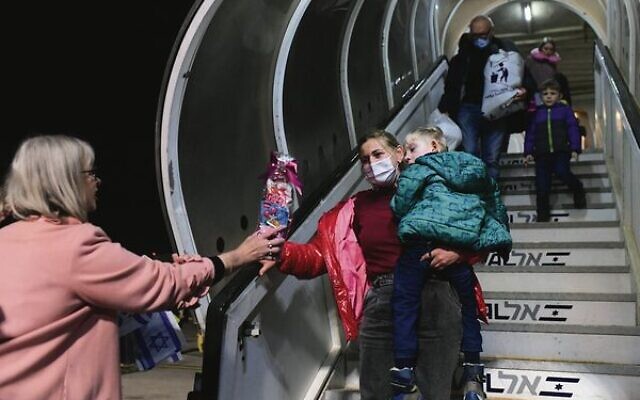 The event will be held after an initial request to address lawmakers via video link was rebuffed, officially because the Knesset is in recess and renovations will be taking place in the building.

After an outcry, Knesset Speaker Mickey Levy spoke with Ukrainian Ambassador to Israel Yevgen Korniychuk on Tuesday and reiterated his invitation to Zelensky.

Efforts are underway to ensure that as many MKs as possible will attend the special session, even though the Knesset is in recess, the Ynet news site reported.

The Walla site said that it was hoped that by holding the event over Zoom, lawmakers who are abroad on delegations would also be able to attend.

This would not be the first time Zelensky has addressed a country’s lawmakers via Zoom. Earlier this month he held a call with US lawmakers, and he was scheduled to deliver a virtual address to Congress on Wednesday.

Ukraine has repeatedly pushed Israel for more support since Russia launched its invasion. But Israel has been seeking to avoid antagonising Russia, which has a strong presence in Syria, where Israel carries out military action against Iran-linked groups.

Although Israel has long had good relations with both Ukraine and Russia, its relationship with Kyiv has been strained because Prime Minister Naftali Bennett has avoided directly blaming Russia for the war, unlike Foreign Minister Yair Lapid.

Earlier this week Israel’s cabinet approved a series of measures to assist new immigrants reaching Israel from Ukraine and surrounding countries, allocating additional funds and resources toward housing and providing basic services to the newcomers.

As of Monday, nearly 2500 immigrants from Ukraine had arrived in Israel since the start of the Russian invasion on February 24. Thousands more have already begun the immigration process.

The government and a number of Israeli organisations have sent representatives to the countries bordering Ukraine to help facilitate the immigration of the waves of refugees fleeing the area.

Israel has further eased its initial entry requirements for those applying for citizenship as more refugees reach holding areas, effectively allowing anyone with a reasonable request into Israel without having to wait, but withholding citizenship until their paperwork can be fully reviewed. More than 200,000 Ukrainians are estimated to be eligible for citizenship under Israel’s Law of Return.