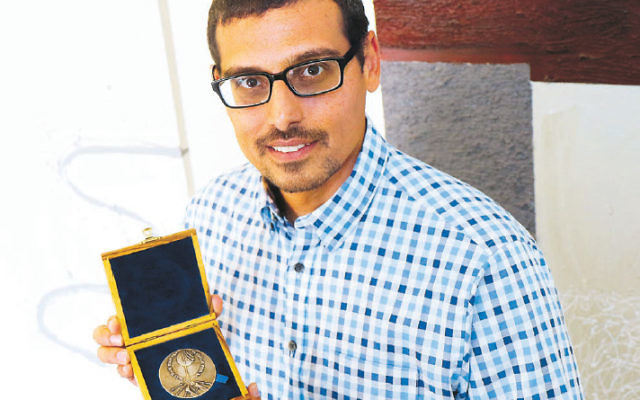 CHILD sexual abuse victim Manny Waks has been gifted a Righteous Among the Nations medal by the grandson of a couple who saved Jewish people during the Holocaust.

During the Shoah, Marthe and Bertus Stroop hid more than 700 Jewish people in the Netherlands.

According to Yad Vashem, “Bertus worked as a baker, going from house to house and making valuable under-ground contacts along the way.

“Many Jewish children and adults found a refuge thanks to the Stroops and the couple supplied those in their care with food, clothing, med-ical care, and moral support.”

Robert Stroop, the couple’s grandson, told The AJN that he tried to give the medal to Yad Vashem and several Jewish museums but he found it very difficult.

“I read all about Manny and because I’ve also been sexually abused and I’m getting old and sick, I thought he would be the best person to give it to,” Stroop said.

“It was very emotional meeting Manny and we spent five hours together at my house talking.”

Waks told The AJN he was hon-oured to be given the medal.

“Even though the medal wasn’t presented to me personally, it was really nice to receive such a unique medal from someone whose grand-father received one of the most respected medals in the Jewish world,” Waks said.

He said it was a great reminder of the fact that people appreciate what he has done for the community, des-pite the backlash, angst and critics from some sections.

“From my perspective, this is recognition of not standing idly by and seeing injustices occur.

“In this case, the injustice was child sexual abuse.

“His grandparents received the medal for potentially putting them-selves in harm’s way, and in our com-munity we often use the Holocaust as a reminder of not standing idly by; but many people, including leaders, stood idly by while injustice was going on.

“This is a reminder about doing the right thing.”

In the days after receiving the medal, Waks launched his book, Who gave you permission?, in Sydney.

Co-written with journalist Michael Visontay, it delves into what life was like growing up in the Melbourne Chabad community, how he felt when he was sexually abused, and later when he revealed his abuse to leaders, and more recently the backlash he has felt by others in the Chabad community.