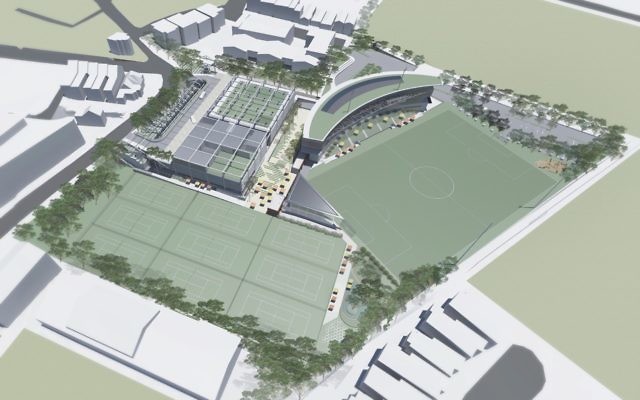 A 3D rendering of how Hakoah White City will look.

THE dream of a Jewish sporting and community centre is almost a reality after a development application (DA) was approved for Hakoah’s White City property this week.

In a major step forward for the club, which purchased the site more than five years ago, the Joint Regional Planning Panel on Tuesday unanimously agreed to Hakoah’s proposal, finding that the application was “well-considered” and “will provide sporting facilities currently missing in the Woollahra local government area”.

The approved DA comes on the back of a report and recommendation for approval from Woollahra Council planning staff and councillors.

“The DA approval is a watershed moment in the redevelopment of White City. The approval of the building envelopes and proposed uses on the site is a significant step along the road to the building of the proposed facilities,” Hakoah president George Farkas said.

“Hakoah’s detailed Heritage Interpretation Strategy, with ­additions, has been accepted and approved as an appropriate ­recognition of the heritage significance of White City, so as to allow development to take place.”

Stating that it has been a “complex and very involved process” which has required an “outstanding collaborative team effort and exceptional dedication, hard work and perseverance”, Farkas said Hakoah extended its appreciation to the consultants and the many people involved in the project who had been instrumental in achieving this outcome.

He said the board particularly wanted to thank Phillip Wolanski and Allen Linz, co-chairmen of the Development Committee, for their “outstanding work and dedication”, the Committee and Hakoah’s life patron Frank Lowy and Steven Lowy for the “benefit of their experience and wise counsel along the journey”.

“Hakoah also wants to acknowledge and thank Woollahra Council’s planning staff and councillors for supporting the DA, their guidance and hard work and for recognising the widespread benefits of the proposed facilities, which will be the envy of every other municipality,” Farkas said.

“It has been a productive cooperative process, which Hakoah looks forward to continuing in the future.”

He said Council has left “a significant legacy, in being instrumental in the revitalisation of what has been for far too long an underused and dilapidated site, to become a state-of-the-art sporting and recreational centre”.

“As significant as the DA approval is, it is but one step in a continuing process required to achieve our vision to provide unique sporting, recreational, social and cultural facilities and a community centre at White City”.

Earlier this year an agreement, brokered by Frank Lowy, saw the current board given until the end of the year to work through heritage issues, planning issues and the DA for Council.

If by the end of 2015 the Hakoah board was not able to demonstrate to Lowy’s satisfaction that its DA would be approved by Council, it would have resigned.

Immediately upon hearing of the DA approval, Lowy rang Farkas from Israel to say how “thrilled and exhilarated” he was at the approval, and to congratulate the board and everyone involved, noting that there is “a lot of hard work to follow”.