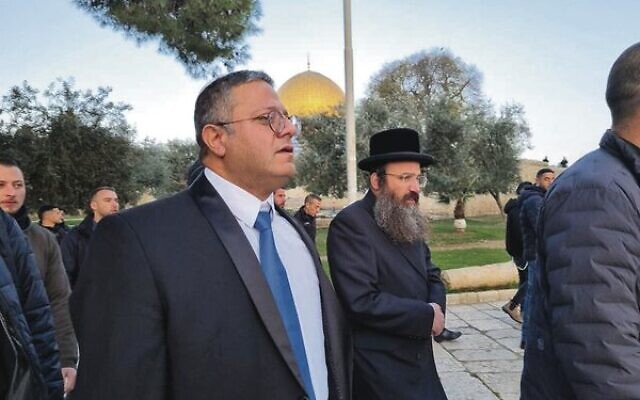 The United Nations Security Council held an emergency session last Thursday at the request of China and the United Arab Emirates, which Israeli ambassador Gilad Erdan called “absurd” and hypocritical.

“We are here discussing the peaceful 13-minute visit of a Jewish minister to the holiest Jewish site under the sovereignty of the liberal democracy of Israel,” said Erdan, who blasted the 15-member security council for not holding similar meetings in response to Russian actions in Ukraine, Palestinian terror or Iranian attacks on international shipping.

“This meeting creates a sense of emergency over a non-event.”

Jordan, which views itself as a custodian of the Mount, castigated Israel over the far-right minister’s visit.

“Jordan condemns in the severest of terms the storming of the Al-Aqsa Mosque and violation of its sanctity,” the Jordanian Foreign Ministry said in a statement.

Ben Gvir did not enter the mosque. He made a 15-minute visit to the Temple Mount compound around 7am – during the time Jews are allowed to enter the site. He had visited on numerous previous occasions, but Tuesday’s trip was his first as a minister.

After the visit, a spokesperson for the US embassy in Israel said the status quo must be maintained at holy sites, and that Jerusalem understood Washington’s position on the matter.

Israel’s ambassador to Jordan, Eitan Surkis, was called into Jordan’s Foreign Ministry offices for a dressing down, according to Hebrew media reports. Surkis told the Jordanians that Israel remained committed to the status quo, that there had not been any violations of the agreement and that Israeli ministers have visited the site in the past.

Prime Minister Benjamin Netanyahu had been slated to soon visit the UAE on his first official trip, but it was postponed on Tuesday due to “logistical reasons”. Officials denied there was any connection between the trip’s cancellation and Ben Gvir’s visit to the Temple Mount, the Ynet news site reported.

The Saudi Foreign Ministry also joined the wave of condemnation. Netanyahu has frequently expressed hope for progress in normalisation between Israel and Saudi Arabia, which has conditioned the establishment of diplomatic ties between the countries on the creation of a Palestinian state.

The Egyptian Foreign Ministry warned of “negative repercussions” to security and stability in the region. Turkey’s Foreign Ministry condemned the “provocative act by the Israeli minister of national security”. Bahrain’s foreign ministry said the visit was a “provocation against Muslims and a violation of international law.”

“As a minister representing the government of Israel you should be acting according to Chief Rabbinate instructions, which have long forbidden visiting the Temple Mount,” Yosef wrote in a letter to Ben Gvir.

An official in the Prime Minister’s Office said Netanyahu was committed to “strictly protecting the status quo on the Temple Mount without any change”.

Ben Gvir’s visit came hours after reports said that he had agreed to postpone his planned trip following a meeting with Netanyahu, and despite condemnation from the opposition and threats from the Gaza-ruling Hamas terror group.

Opposition leader Yair Lapid, who had warned the visit would lead to bloodshed, said Ben Gvir had highlighted weakness on the part of Netanyahu.

“The State of Israel does not accept dictates from anyone regarding its security, but to quarrel with half the world just so that Ben Gvir can spend 13 minutes on the Temple Mount is political irresponsibility and incredible weakness from Netanyahu in the face of his ministers,” Lapid tweeted.

Ben Gvir has long been an advocate of formally altering the status quo, in which Muslims are allowed to pray and enter the Temple Mount with few restrictions, while Jews can visit only during limited time slots via a single gate and are not allowed to pray.

Netanyahu has sought to assure Israel’s allies that he will not allow any changes, and had a clause included in all his coalition deals stipulating the preservation of the status quo.