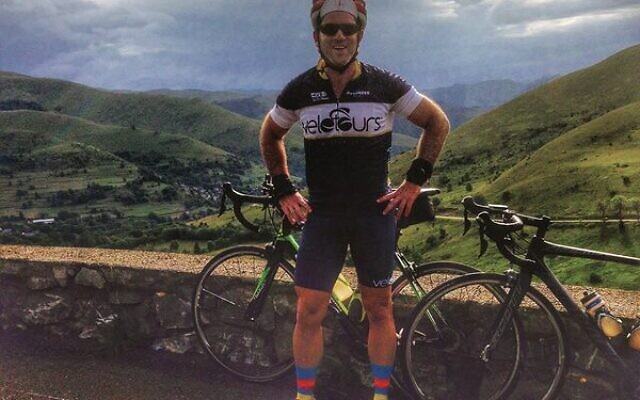 MND fighter and cyclist Warren Galgut at the Col de Peyresourde in the Pyrenees on a group ride around the route of the 2016 Tour de France.

His tongue didn’t feel right when he was speaking on work calls. Then he started to notice a shake in his right arm and mouth.

Worrying that this could be the beginning of the incurable Motor Neurone Disease (MND), Galgut sought medical advice, but between December 2020 and May 2021, the fit 42-year-old was told by a neurologist that he did not have the debilitating disease and not to worry. Instead, the specialist put it down to anxiety.

“I have never had anxiety or been a stressed person in my life and I didn’t believe that I could have such bad anxiety that I couldn’t talk properly and had shakes through my arms,” Galgut told The AJN.

“But once a neurologist says you don’t have MND and have anxiety, no one really listened to me when I said I didn’t have anxiety.”

Eventually, Galgut sought further assistance and had another neurologist conduct multiple tests. “Even these tests weren’t conclusive,” he said.

Last month Galgut’s deteriorating symptoms led him to visit another neurologist, who finally diagnosed him with MND.

“You expect smart doctors to swing into action and tell you all about the next steps and aggressive treatment, but there’s nothing like that. You just walk out and there’s nothing to do except continue to deteriorate and be periodically monitored. It’s quite sickening.”

Currently, there is no treatment or cure for MND and the average life expectancy from the time of diagnosis is just 27 months. 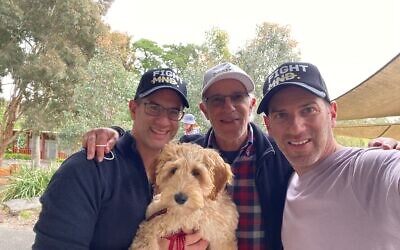 Galgut, a father to son Oliver who is just two years old, said, “Mentally, I go through periods of sadness and anger and feeling sorry for myself and my family, but I try to just stay busy and be positive about what I can do now.”

The Armadale local, who is coping with the diagnosis through humour, commenting that “sometimes it’s just best to be funny and even inappropriately so about my situation,” said he has been most impacted in the mouth and jaw so far.

“None of it works properly any more so speaking, eating, drinking and even swallowing is becoming increasingly difficult,” he said.

The accountant, who is also a director in a corporate finance team at Pitcher Partners, had to stop work on sick leave at the end of May because of his declining speech. At this point, he was still being told that it was just anxiety.

Unfortunately because of the lockdown, the Galgut family haven’t been able to do the things they’d planned to do, such as go on cycling and camping trips, but are now using the downtime to raise awareness and funds for MND.

Currently he is taking part in Fight MND’s 27 Challenge, which started on September 27 and runs until November 27. The initiative asks participants to choose an activity related to the number 27. While the life expectancy from the time of MND diagnosis is 27 months, Galgut sees hope in co-founder of FightMND, former Essendon player and Melbourne Football Club coach Neale Daniher, who has been fighting his diagnosis since 2013.

Ready to fight like Daniher, Galgut and his team of 15 family and friends have signed up to do a range of different activities.

“My husband and I are running for 27 mins each day,” said friend Ariella Birnbaum, who is helping with fundraising efforts.

Another friend is running 27km a day with a pit stop at Nando’s each time – one of Galgut’s favourite take outs.

Galgut, who is a longtime cyclist, said, “Although I said I’d ride 27×27 for the challenge, I’m absolutely not settling for the average so I’ll be doubling it and doing 54 rides of at least 27 kms over the two months of the challenge.”

“It is just amazing how generous people are being,” he said, “So now I’m aiming for a team target of $100k. Aim high!”