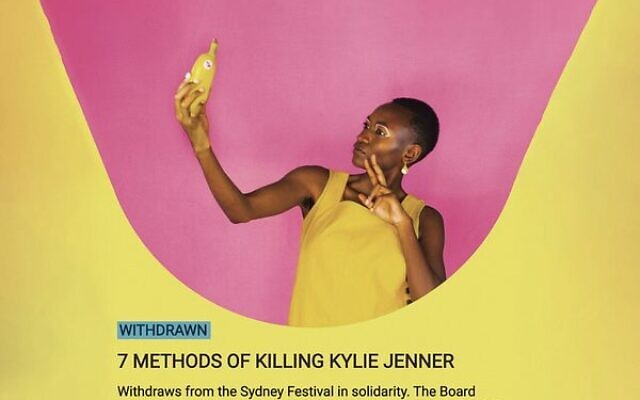 The founder of the Darlinghurst Theatre Company has told The AJN it was not the company’s decision to withdraw the play Seven Methods of Killing Kylie Jenner from the Sydney Festival.

Speaking to The AJN this week, Glenn Terry said the artists behind Seven Methods of Killing Kylie Jenner decided to boycott the festival independently.

“The company respects their position,” he said, noting that Darlinghurst’s A Chorus Line production continued as part of the festival.

“We absolutely do not want to alienate Jewish people. We are inclusive, that’s what we want to be.”

He added it was “distressing” to read of the Hamas association with the boycott.

Belvoir Street Theatre also released a statement this week clarifying its position after it decided to self-fund its performance of Black Brass.

“We have not withdrawn from or boycotted Sydney Festival, and we were certainly not protesting about any events in the festival,” it said.

“The calls for a boycott put us in a difficult position: we wanted to acknowledge strong and varied concerns from our community of artists and we wanted to honour our commitment to audiences and artists of Black Brass. Our judgement was that we could meet both these commitments by self-funding our presentation of Black Brass.

“We didn’t fully appreciate the ramifications of this position for all members of our community.”

Meanwhile the performance at the centre of the controversy, Decadence, has received rave reviews.

NSW Jewish Board of Deputies CEO Darren Bark said, “Multiculturalism and tolerance in NSW were the clear winners as Sydney Festival and Decadance have been an outstanding success.

“We thank Sydney Festival for their dedication to artistic expression, community unity and tolerance in Australia.”

“To start demanding artists boycott festivals and events because of differing views about the world’s geo-political situation risks silencing other diverse voices that are valuable for us to engage with as a society,” he said.

Rejecting an attempt by some activists to link the Palestinian cause to Australia’s First Nations people, Indigenous Friends of Israel founders Munganbana Norman and Barbara Miller said, “Jews are indigenous to the land of Israel.

“Israel is not a racist, apartheid state … those who have boycotted the Sydney Festival have been misled.”

Wentworth MP Dave Sharma said, “In the United Arab Emirates, Israeli cultural performers and tourists are being welcomed with open arms, as such cultural and artistic exchange is seen as a way to promote peace and coexistence between peoples.”

Meanwhile, The AJN approached Greens leader Adam Bandt’s office to ask if Greens Senator Mehreen Faruqi’s tweet in support of the boycott was appropriate given the party’s official position is to reject BDS.

A response was not received by press time.