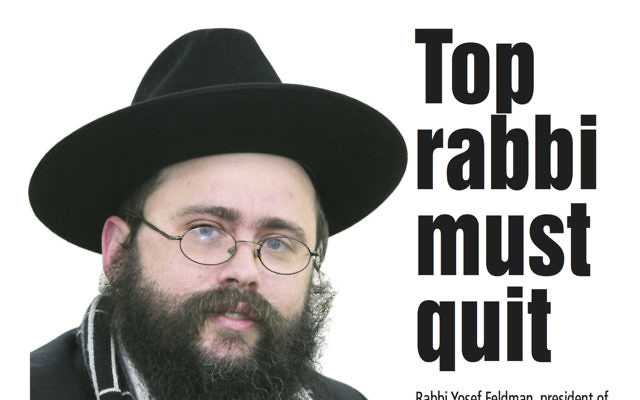 THE Rabbinical Council of NSW (RCNSW) has stated that it made a mistake when it allowed Rabbi Yossi Feldman to remain president when, in 2011, some of his views regarding child sexual abuse allegations were made public by The AJN.

The AJN called on Rabbi Feldman to step down as president of the RCNSW when it published leaked emails, in which Rabbi Feldman put forward a view that a victim should go to a rabbi, not the police.

Rabbi Feldman stepped aside as president for several weeks but was then reinstated as president until the 2012 annual general meeting.

This week at the Royal Commission it was revealed that in 2011 Rabbi Feldman urged fellow rabbis not to call on victims to go the police because it would hurt his “friend”, and now convicted child sexual abuser, David Cyprys, argued that too much media attention would lead “fake victims” to come forward, labelled victim Manny Waks a “phony attention seeker” and put forward a view that a victim of child sexual abuse doesn’t know if the perpetrator will reoffend and therefore must go to a rabbi, and not the police.

“The RCNSW views with distress and dismay the increasingly sordid revelations that are emerging from the Royal Commission into child sexual abuse in Melbourne and Sydney,” the RCNSW executive said in a statement this week.

“Our hearts are heavy and filled with anguish at the suffering endured by the victims.

“We empathise with their pain and the pain of those close to them.

“Had we known of these revelations at that time, the decision to allow Rabbi Yossi Feldman to remain as president until the AGM would have been very different.

“The views expressed by him at the time, as were revealed by the Commission, are diametrically opposed to the position of our rabbinate, and were publicly rejected and condemned by it on many occasions.”

The RCNSW noted that Rabbi Feldman is no longer a member of the RCNSW and reiterated that child sexual abuse is a criminal act and therefore the first recourse for victims and their families is the police.

The cover of The AJN in 2011 when Rabbi Yossi Feldman’s views were first exposed.