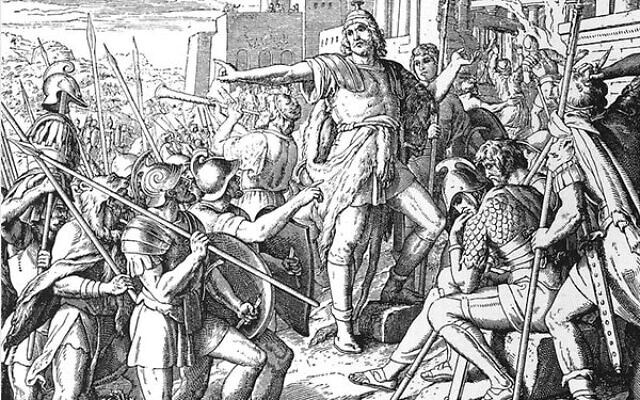 A woodcut of Judah Maccabee from Die Bibel in Bildern. Image: Wikipedia

FOR me, Chanukah was never just another Jewish festival. Its timely message still resonates. Whatever the threat, whatever the source, never be afraid to be Jewish and always fight back against the enemies of our faith even if you are outnumbered.

During his video message to mark the start of Chanukah, British Prime Minister Boris Johnson encouraged Jews to celebrate their “unique identity” and declare to the world they are proud of their Jewish identity. That Johnson felt the need to state this speaks volumes about the dangerous times we live in.

The hard-won freedoms secured by the Maccabees for Jews to practise their tradition is an ongoing battle.

Like Antiochus, who outlawed Judaism and decreed that performing religious rituals was punishable by death, there are groups today that want to kill Judaism and our identity.

The attempt to cancel out Judaism is not history. It is a current event.

The Antiochus of the 21st century is anti-Zionism, the most destructive and deceptive mutation of classic antisemitism that is infecting too many hearts.

In her book How to Fight Antisemitism, Bari Weiss writes, “Chanukah antisemitism, which asks the Jews to commit cultural genocide, abandon their traditions, and worship false idols to survive, is more insidious. You see manifestations of this tragic strain in what has become of the British Labour Party and in the activist and academic left in the United States.”

Anti-Zionism and antisemitism are blood brothers, two sides of the same ugly coin.

In a sentence, anti-Zionism opposes the existence of Israel and advocates that Jews are the only people on this earth who do not deserve a home. A state for everyone – except for the Jews.

Last year, actor Seth Rogen told Marc Maron that he was “fed a huge amount of lies about Israel” and he seemed to question the legitimacy of Israel’s existence.

Have you ever heard anyone say that they have a problem with the existence of any other nation?

Anti-Zionists dream of Jews as a weak, vulnerable minority, at the mercy and whim of other societies and rulers.

They want us as victims again.

Like a poisonous weed, this malevolent agenda spreads through the cracks of social media, metastasising, multiplying and taking root in the fertile soil of existing anti-Jewish invective.

In a warped, virtue-signalling environment, calling for a “one-state solution” or chanting “Palestine from the River to the Sea” is a safe, socially acceptable way to hate Israel and a sure-fire way to show that you care about justice.

If you refuse to renounce immoral Israel, if you believe that Israel has a place amongst the family of nations, there is no room for you.

This dehumanising, exclusionary ideology divides Jews into good and bad. Jews are denied the rights afforded to other people.

And that contemptible expression of prejudice is pure antisemitism.

Anyone who supports ‘imperialistic’, ‘apartheid’, ‘genocidal’ Israel is ostracised as an ‘oppressor’ and cannot participate in civic life.

Last October, the DC branch of Sunrise, an American youth-led national advocacy group, withdrew from a rally in Washington because three Zionist organisations were part of the effort, and in Melbourne protestors targeted The Melbourne Queer Film Festival simply because it dared to screen an Israeli film.

No other country was singled out.

Now tell me it’s not about Jews.

For a ‘progressive’ movement that seemingly champions diversity and inclusivity, it matters not that Jews care and champion women’s rights, poverty, justice, homelessness, the environment or LGBTQI+ rights.

At that time, Daniel Patrick Moynihan told the General Assembly that the UN granted “symbolic amnesty … to the murderers of the six million European Jews”.

Taken to its logical conclusion the implications of anti-Zionism are chilling. If Jews are ‘invaders’ and ‘colonisers’ in Israel, where are they supposed to be?

If you listen to Herman Heinsbroek, former minister of economic affairs in the Dutch government, all Jews in Israel must be transferred to the US. Why? Because this will bring about world peace.

As philosopher Vladimir Jankélévitch observed, anti-Zionism “became a magical formula enabling one to be democratically antisemitic”.

While nations where the dominant religion is Christianity, Islam or Hindusim have a right to exist, a Jewish state does not.

Anti-Zionism has created a dangerously hostile climate, providing a perfect cover for violence against Jews since anyone who stands up for nefarious, ‘Nazi’ Israel must be a collaborator and is fair game for attack.

Like the warnings on cigarette packs, there should be a label that states: anti-

Zionism leads to the murder of Jews.

Professor Doron Ben-Atar shrewdly observes that on university campuses, “Anti-Israel radicals have taken to threats and intimidation in their battle to establish anti-Zionism as the doctrinal orthodoxy.”

In a recent survey by the AJC titled, “The State of Antisemitism in America 2021”, nearly 40 per cent of Jews noted that they modified their behaviour because of antisemitism, while 30 per cent of respondents said they avoided publicly wearing or carrying anything that would identify them as Jewish.

Now, more than ever, we should commit to displaying our Judaism and love for Israel. Not doing so means handing a victory to the Israel-haters and the bigots.

Like the Maccabees, we must refuse to capitulate to the spectre of anti-Zionism. Rather than curse the darkness, we must light the candle of resistance.

The miracle of Chanukah is not only about the fact that the menorah in the Temple lit for eight nights. The miracle is that despite the relentless attempts to eradicate us, to snuff the blazing fire of our deepest convictions and beliefs, those who wish us harm have not succeeded.

And yes, visibly identifying as Jewish heightens the risk of being vilified or worse. But that cannot deter us from saying out loud, “We are here, and we are not going to hide.”It is a clarion call each one of you must answer.

Dr Dvir Abramovich is chairman of the Anti-Defamation Commission. His latest book is The New War Against the Jews: Writing from the Trenches.