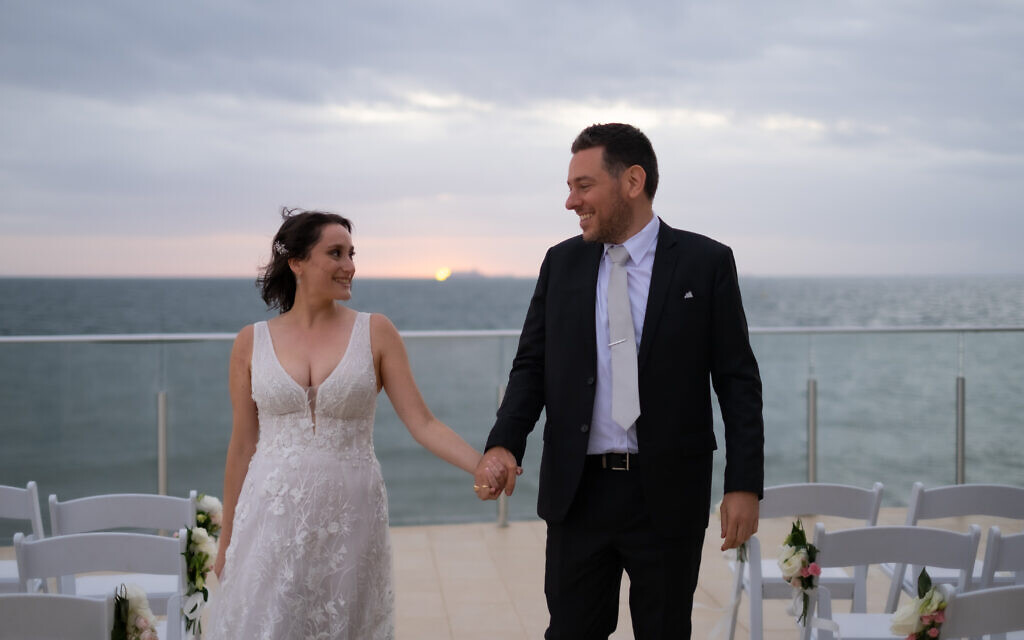 For most couples, their wedding day is the culmination of many months of planning and effort, but for Melbourne’s Michelle Shmerling and Sydney’s Daniel Hornung everything came together in less than a day! It was on the morning of Friday, February 12, just two days out from when Michelle and Daniel were due to be married in Melbourne, that talk of Victoria going into a five-day COVID-19 lockdown hit the airwaves. The couple had already postponed their wedding date from November last year, so when the lockdown loomed, Michelle rang her mother Leah and they discussed bringing the wedding forward to that afternoon! Nothing was going to stop Michelle and Daniel’s special day from taking place.

First they checked that the wedding venue, Sandringham Yacht Club, was available, then they checked with the caterer, Kosher Classique, their rabbi and photographer. All were put on standby until lockdown was confirmed by the Victorian government at 1pm. In the meantime Michelle, 33, a product manager, and her mum went for a manicure, telling customers at the nail salon of their predicament of urgently needing a hairdresser. So all the customers rang their hairdressers until they found someone to step in at short notice. Daniel, 36, a digital marketer who grew up in Sydney, was thankful that his parents had arrived in Melbourne three weeks earlier. Other family and friends had also arrived a week or two earlier to ensure they were not turned back at the Victoria-NSW border, including two friends in the bridal party. The chuppah was set for 4pm at the Sandringham Yacht Club and the 140 guests were notified by text and phone of the new wedding arrangements.

It was nearer 5pm when the ceremony took place with about 90 family and friends in attendance – some dressed formally, some in work attire and others in jeans. “There was a lot of love and support as we got married,” said Michelle. “Everyone made a big effort to be there. Friends who are teachers had to leave class early and the caterer was amazing as he didn’t know how many people would be coming.” In addition, the rabbis and caterers had to leave before Shabbat started, as did some of the guests. On the journey to the function venue Michelle discovered that the band was unavailable, the musicians believing the wedding was still being held on the Sunday. Undaunted, she asked friends to organise recorded music for the dancing. The wedding celebrations went until 9pm and Michelle and Daniel, who had met when she travelled to Sydney a few years ago and were engaged in January 2020, were thrilled that they beat the lockdown that started at midnight. “It was a lovely, chilled simcha,” said Michelle. For family and friends from Sydney who could not travel to Melbourne for the wedding, the couple later invited them to celebrate with them while enjoying a meal at a Sydney restaurant.