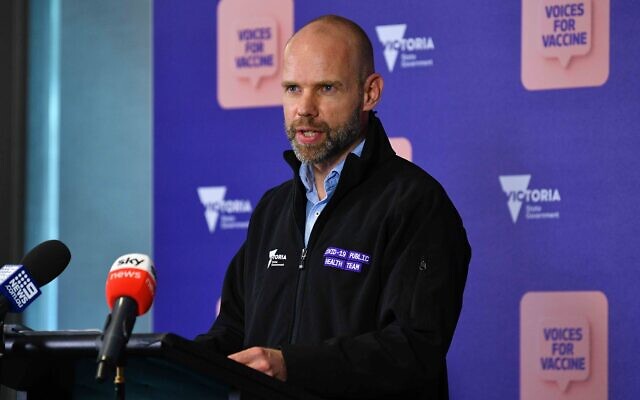 Victoria’s COVID-19 commander Jeroen Weimar has apologised to Melbourne’s Jewish community after publicly stating that within the St Kilda mystery cluster, “We have accountants, we have architects, we have a sex worker, we have members of the Orthodox Jewish community and a pizza guy who works in a pizza shop.”

Weimar’s comments during Wednesday’s press conference were picked up by several media outlets, and triggered widespread anger from members of the community and state politicians.

Victorian Opposition leader Michael O’Brien lamented, “What was the religion – if any – of the pizza shop worker? We don’t know? Because it is not relevant.”

Daniel Andrews stoked a fire. For the first time, he referred to rule breakers by faith. Many in the Jewish community have had a week from hell.

Yesterday, Commander Weimar referred to the community as a profession.

Caulfield MP David Southwick added, “If this was reported about other religions there would be an uproar.”

In a statement to the Anti-Defamation Commission (ADC) on Thursday afternoon, seen by The AJN, Weimar issued a lengthy apology.

“I am sorry for my poor choice of words yesterday.  I was attempting to highlight the sheer diversity and range of people in the St Kilda area who were – through no fault of their own – COVID positive,” he said.

Weimar added, “Antisemitism is a twisted dark knot in our vibrant Victorian community.  It has no place in our society and only serves to divide and undermine us all.

“I am grateful to all the leaders of the Jewish community that I have worked with over the last year and look forward to continuing our work together.”

Spot the odd one out!

Since when did a local residents religion become a profession?

If this was reported about other religions there would be an uproar.

Welcoming Weimar’s apology, ADC chair Dvir Abramovich told The AJN on Thursday, “We unreservedly accept Jeroen Weimar’s apology, which is sincere as it is heartfelt, and applaud his full-throated denunciation of antisemitism.

“I appreciate his efforts to immediately reach out and recognise that statements such as these require the highest level of human capacity—mindful self-reflection and the ability to acknowledge another person’s feelings. For that, I am grateful.”

He added, “During our lengthy conversation today, Mr Weimar heard my and the community’s concerns and immediately expressed his deep feelings of remorse, and we take him at his word when he says that he did not have any intent to cause hurt or offend.”

Among the media outlets which broadcast Weimar’s comments was the Seven Network, which aired a graphic of the various occupations and included “Jewish community members”.

The AJN understands a screenshot of the graphic has been widely circulated within the community, with social media users saying, “This is so wrong … faith has nothing to do with it.”