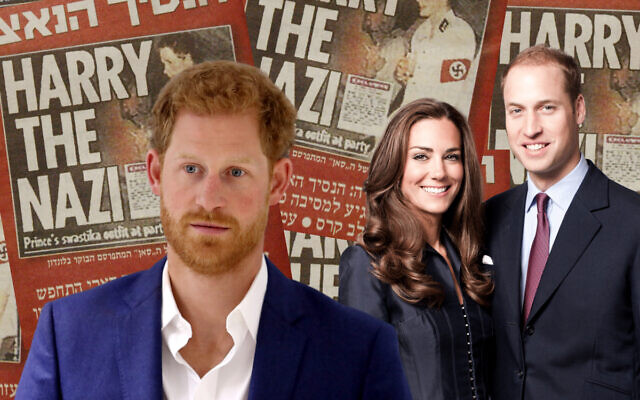 Apparently, the book makes claims that range from the controversial (Prince William knocked Prince Harry to the ground over Meghan Markle) to the downright weird (Prince Harry had a frostbitten penis at William and Kate’s wedding and is, in fact, circumcised). The most inflammatory detail, however, is also perhaps the most relevant to our Jewish audience.

In Spare, per Page Six, Prince Harry says that Prince William and then-girlfriend Kate Middleton were a part of his infamous decision to wear a Nazi costume to a Native and Colonial-themed party in 2005.

“I phoned Willy and Kate, asked what they thought. Nazi uniform, they said,” Harry writes, explaining that he was deciding between a pilot costume and a Nazi costume.

Going on, he describes trying on the Nazi outfit for them, writing, “They both howled. Worse than Willy’s leotard outfit! Way more ridiculous! Which, again, was the point.”

Rightfully so, the then 20-year-old Prince was heavily criticised for the decision after a photo of him in the costume (complete with a red swastika armband) was published on the front page of The Sun newspaper with the headline ‘Harry the Nazi’.

This revelation comes just weeks after the Harry & Meghan docuseries debuted on Netflix, in which the Duke of Sussex called the incident “one of the biggest mistakes of my life.”

“I felt so ashamed afterwards,” he said on-camera. “All I wanted to do was make it right. I sat down and spoke to the chief rabbi in London, which had a profound impact on me. I went to Berlin and spoke to a Holocaust survivor.”

He added, “I could have got on and ignored it and made the same mistakes over and over in my life, but I learned from that.”