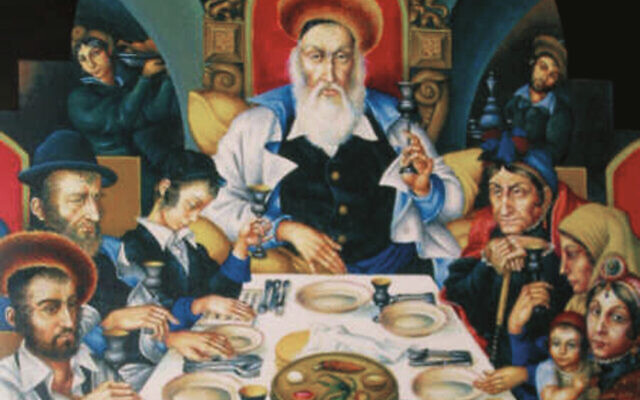 'The Seder Table' painted in 1936 by Arthur Szyk is shown at an exhibition of his work at the Jewish Historical Institute in Warsaw, which opened June 30, 2005. Credit: Carolyn Slutsky

WHY is this year’s first seder different from most sedarim that we have experienced? The answer is that this year the first seder is on Friday night, i.e. Shabbat.

Given an important calendric principle that “lo ba’d’u (bet/daled/vav) Pesach – first day Pesach never falls on a Monday (day 2 – bet of a week), Wednesday (day 4 – daled) or Friday (day 6 – vav)”, the second seder is never on Friday night/Shabbat as for that to happen first day Pesach would have had to be on Friday. So by far the majority of sedarim do not fall on Shabbat.

Why am I concerned? What difference does it make when Pesach occurs? Basically the concern arises from the fact that this year the stringency of Shabbat laws applies to all last minute seder preparation activity. Yom tov differs from Shabbat in that while much work as halachically defined is forbidden on both, much of the detail involved in food preparation (except for kindling a fire) and also carrying outside an eruv are permitted on yom tov.

However when yom tov occurs on Shabbat, Shabbat stringencies apply. So, for example, food that might normally be prepared while the pre eating part of the seder proceeds, must be prepared prior to Shabbat. Even fully cooked food must be left on a covered flame or blech (warmer) – as is normally the case on Friday evening (even though on Friday evening eating occurs much closer to the commencement of Shabbat than is the case with the seder meal that follows the lengthy telling part of the Haggadah). Those who eat gebrochts and might normally place balls of knaidlach mix in boiling soup shortly prior to the time of eating cannot do so on this seder night – the knaidlach must be cooked in advance and cannot, even if cooked, be added to the soup boiling in the pot. For further details regarding relevant questions consultation with a rabbi or your attendance at a pre-Pesach shiur is strongly recommended.

However this particular circumstance of first night Pesach coinciding with Shabbat brought to my mind another unrelated issue with a fascinating history.

On the second night of Pesach we will commence the counting of the Omer. Says the Torah in Vayikra (23:15, amidst the portion read on second day Pesach): “Us’fartem lachem mimochorat haShabbat – and you shall count for yourselves from the day after the Shabbat – miyom havi’achem et omer hatenufa – from the day that you bring (to the Temple) the omer of barley that is waved … seven complete weeks. Ad mimochorat haShabbat hashvi’it – till the day after the seventh Shabbat you count 50 days and bring a new offering (from the new wheat crop).”

Around the time of the destruction of the Second Temple there were major disputes between those who accepted the written Torah in conjunction with an oral tradition as we do, and those who denied oral tradition. In a key such dispute the latter insisted that the counting of the Omer must always begin on a Sunday (as it will this year) with the ensuing Shavuot also being on Sunday (literally “mimochorat haShabbat hashvi’it – on the day after the seventh Shabbat”). However the sages who are our forebears followed oral tradition in interpreting the verse as we do. That tradition specifies that no matter on which day of the week it falls, we begin to count on the day after the first day Pesach which from a Torah perspective is a Shabbat (rest day) compared to the days Chol Hamoed that follow, the intermediate days of the festival when some work is permitted. That the rule as we follow it was accepted as binding by followers of rabbinic Judaism thereby denigrating the views of those who denied rabbinic tradition was considered so significant that a level of festivity was established (on and after Nisan 8) to mark the date of this victory (Menachot 65a).

But, you may ask, was this really so important?

The answer is – absolutely! This debate had far reaching implications.

For the reality is that without rabbinic tradition it is hard to envisage practice of any elements of Judaism. Points at issue are not just such mitzvot such as tefillin about which it says you shall bind them (the words of the relevant portions) to one’s arm and forehead and the written Torah provides no detail as to how this is done. Even simple matters we take for granted are meaningless without the accompanying tradition.

Thus we are about to eat matzah. How do we know what a matzah is? On Sukkot we are enjoined to dwell in a sukkah. What is a sukkah? And the same goes for so many other aspects of ritual practice we take for granted. Tradition is the key to almost all we do.

Indeed as this year we do actually celebrate Pesach from Shabbat to Shabbat we are incidentally reminded of the basis of our tradition and practice – so many aspects of which have enhanced the festival of Pesach and Judaism as a whole.

Let me conclude however with reference to my starting point. Why can first day Pesach never be on Monday, Wednesday or Friday? This is a product of the inevitable connection between the day of the week that Pesach commences and the day of the week on which other festivals occur. Yom Kippur is always on the same day of the week as fifth day Pesach. When the calendar was fixed, care was taken that Yom Kippur should never be on a Friday or Sunday as that would mean two consecutive days with the stringencies applicable to Shabbat and Yom Kippur. If Pesach began on Monday or Wednesday, Yom Kippur would fall on a Friday or Sunday respectively – an unacceptable outcome. Similarly, if Pesach began on a Friday, Hoshanah Rabbah would fall on Shabbat. As there is no alternative day for observing its special rituals, this cannot be allowed to happen.

Hence Pesach can only commence on Sunday (the rarest of the four acceptable possibilities), Tuesday, Thursday or Shabbat with the first seder in each circumstance on the previous evening.