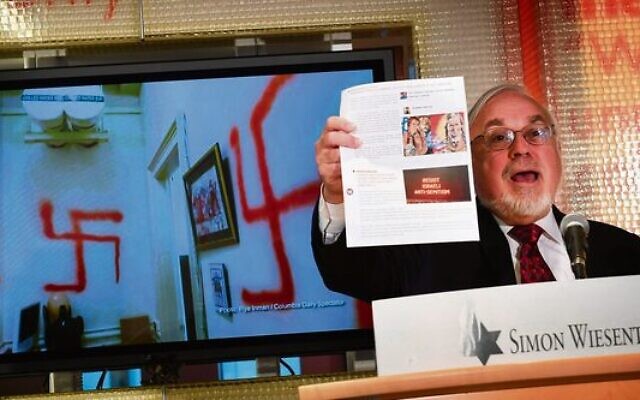 After the state of Iran and Hamas, third on the 2021 list is the BBC, which has been under intense scrutiny since its disputed report on a London antisemitic attack. At number 5 is Jewish Voice for Peace, a Jewish anti-Zionist group.

And at number 7 is the entire state of Germany, which the Wiesenthal Centre claims has “failed to curb antisemitic attacks from the far-right, Islamists, and the demonisation of Israel from the left”.

The entry singled out Michael Blume, the commissioner against antisemitism for Baden-Württemberg, for “liking” a 2019 Facebook post from a “friend” that read: “Zionists, Nazis and radicals should quickly say goodbye to my friends list.”

The report says that Germany allows Blume to “engage in these antisemitic and anti-Israel activities on social media”.

Blume told JTA he does not recall “liking” such a post, and that he may have done so on a text that was later edited.

“I believe that Zionism is fully legitimate and that Israel has the right to exist securely for all times to come. For me, anti-Zionism equates [to] antisemitism, pure and simple. I have travelled to Israel as a friend and ally repeatedly and I have spoken and written extensively about this topic,” he said.

The Wiesenthal Centre, von Schnurbein tweeted, was “harm[ing] the fight against” antisemitism with its list.

An umbrella group of Jewish communities in Baden-Württemberg – the Israelite Religious Communities – also slammed the inclusion of Blume, stating, “It is heinous to put this bridge builder on a list of enemies of Israel.”

With almost half the world’s Jewish population residing in Israel, “you cannot fight ‘antisemitism’ without opposing all those who attack Zionists and demonise Zionism,” he told JTA.

Past years’ lists have also drawn criticism, including the 2017 mention of former Berlin mayor Michael Müller for not taking a stronger stance against the boycott, divestment and sanctions movement. Leaders of German Jewry called that entry “grotesque”.