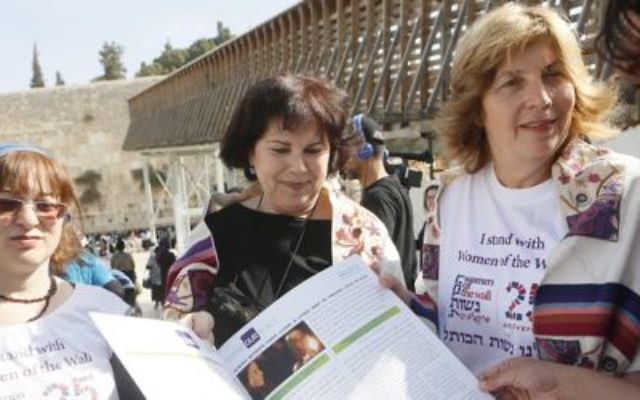 FIVE female stalwarts of the Australian Jewish community have joined women from across the globe in contributing to a publication celebrating the 25th anniversary of the Israeli women’s rights organisation Women of the Wall.

The Australian branch of New Israel Fund (NIF) and the Australian Reform Zionist Association (ARZA) organised the Australian contribution to Taking Our Place – a pioneering publication by NIF aimed at recognising the advances made by Women of the Wall, and the place of women in modern Judaism and the broader community.

The book includes personal accounts from Susi Brieger OAM, Barbara Ford, Ilona Lee AM, Rabbi Jacqueline Ninio and Ruth Wilson, on how their connection to their Jewish heritage has been strengthened by moves towards greater equality.

It also looks at what can be done over the next quarter of a century to secure the place of Jewish and Israeli women in leadership roles.

Ilona Lee AM, the director of NIF Australia told The AJN that Australian Jewish and community bodies are increasingly mirroring the messages of Women of the Wall, yet denies that “organisations that are particularly male-dominated” are in tune with Women of the Wall and their specific goals.

She said the responsibilities of maintaining a home, child care and employment prevent women from taking on leadership roles in their communities.

“It is almost impossible for a woman to put her hand up for a leadership position until her children have grown and professional responsibilities decrease or she is wealthy enough to have paid assistance,” she wrote.

Taking Our Place is a show of support from Jews around the world for inclusion, tolerance and pluralism in Israel; and Ford, president of ARZA said she hoped the support of Women of the Wall will “ensure that Israel becomes a truly democratic and inclusive society.”

Liam Getreu, executive director of NIF Australia, said: “There is so much in Israel to be proud of, and it’s critically important we continue

to be vigilant and look out for instances where equality – be it between genders, Orthodox and secular, or Jews and Arabs – is not being upheld to the standard we hope Israel will meet.”

Founder of Women of the Wall Anat Hoffman with fellow activists receiving the Taking Our Place publication on the movement’s 25th anniversary at the Kotel a few weeks ago.