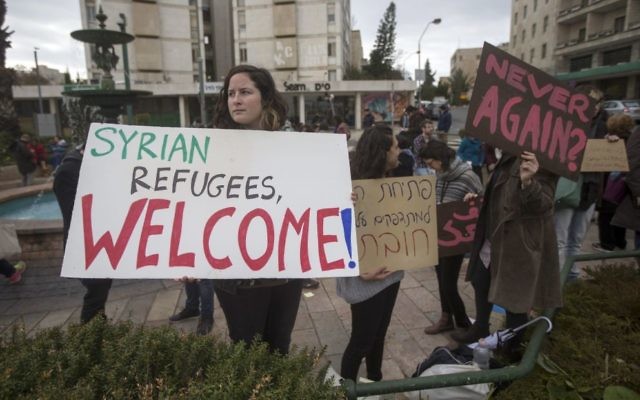 As the news from Aleppo sinks in, Israeli politicians are responding angrily, members of the public are demonstrating, and a furious monologue by a Tel Aviv-based Arab journalist is going viral.

One of Israel’s top Holocaust scholars has also entered the discussion, saying that if his country is to live up to its -post-Holocaust promises, the world must act. Yad Vashem chairman Avner Shalev said at a conference on Sunday: “World leaders and the global community must put a stop to these atrocities and avert further suffering, as well as providing humanitarian assistance to the victims seeking safe haven.”

Israel’s Defence Minister Avigdor Lieberman has branded Syria’s President Bashar al-Assad a “butcher” who “should be removed from power”.

Though Israel normally avoids taking sides in the Syrian crisis, Lieberman said: “Assad is a butcher, who has slaughtered and murdered hundreds of thousands of people, including by using chemical weapons. In my opinion, he should be removed from power – and we should block Iranian involvement in Syria.”

Opposition Leader Isaac Herzog has also lamented the failure to prevent slaughter. “The world is silent and the world has failed,” he said.

Some 1400 Israelis formed a human chain that ran between the American and Russian embassies in Tel Aviv on Sunday to protest their policies. The protesters held placards aimed at the diplomats from these two countries, declaring in English and Russian: “Stop the killing.” Organisers told the crowd that they initiated the event “because you don’t stand by as your neighbour bleeds”.

A bigger display of outrage is expected on Saturday night in Tel Aviv’s Rabin Square. The Light of Hope Event, which will include a Chanukah lighting and speeches about the Syria crisis, is expected to draw tens of thousands of people.

The host of this event is the woman of the moment on Israeli social media, Lucy Aharish. Israel’s first Arab news anchor, a monologue that Aharish delivered on air about the Syria crisis has gone viral with around 11 million views. She was live on Israel’s Channel 2, and announced that she was switching from Hebrew to English, “because maybe then, someone in the world will listen”. She said that what is happening in Aleppo is a “genocide” and a “holocaust”.

Aharish said that people “are standing doing nothing while children are being slaughtered every single hour”. She continued: “Don’t ask me who is right and who is wrong, who are the good guys and who are the bad guys because nobody knows and frankly it doesn’t matter. What matters is that it is happening right now in front of our eyes and nobody in France or in the UK or in Germany or in America is doing anything to stop it.”

She said: “I am an Arab, I am a Muslim, I am a citizen of the State of Israel, but I’m also a citizen of the world and I’m ashamed. I’m ashamed as a human being that we chose leaders who are incapable of being articulate in their condemnation and powerful in their actions. I’m ashamed that the Arab world is being taken hostage by terrorists and murderers and that we are not doing anything. I am ashamed that the peaceful majority of humanity is irrelevant once again.”

One Israeli, Lieutenant-Colonel Erez Eshel, a prominent right-wing activist, feels so strongly about the tragedy in Syria that he is suggesting the IDF should join the conflict. He wrote on Facebook – in a post that made Israeli headlines – that it is time for a thousand senior soldiers to tell Prime Minister Benjamin Netanyahu: “We are prepared to go to war. Now. In Syria.

“We are prepared to kill and be killed, in order to stop the massacre of men, women, and children, which is happening as we speak. Cruel people are committing brutal murder under the Assad regime.”

Questioned by The AJN on his stance, he said: “We are a state and we’re independent and strong, and we are an example. When we see innocent people suffering we have to be there in order to help them.”

He dismissed objections, such as a clash with Russia, saying that Russian President Vladimir Putin “only went into the Middle East when he saw the weakness of Europe and America, and if he sees that we’re going to have control he won’t interfere”.

In his post Eshel argued: “Less than 80 years ago our grandfathers and grandmothers prayed and cried out for a nation that would be willing to risk its life in order to save them. They prayed for an army that would be brave and moral enough to fight, kill and be killed, in order to stop the Nazi oppressor. There was no such nation.” He said that within three days Israelis could arrive in Aleppo and “stop the destruction”.