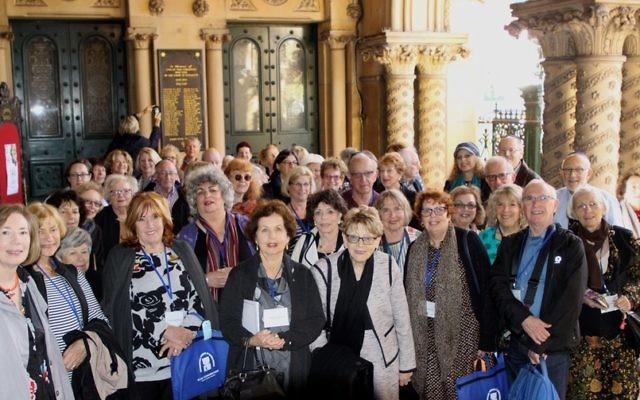 ICJW delegates in the entrance of The Great Synagogue. Photo: Wendy Bookatz

Human rights, saving the planet, women from culturally diverse backgrounds and pushing the constraints of orthodoxy were some of the topics under the microscope – all centred around the broader theme of Evolving Beyond Tradition – providing for fruitful discussion across three thought-provoking days.

Key dignitaries wrote welcoming messages of support to ICJW delegates, including Premier Gladys Berejiklian, Governor David Hurley and Israel’s ambassador to Australia Mark Sofer, who commented, “The ICJW has played an integral part in supporting the modern State of Israel, ensuring unity and fraternity amongst our people and fighting for the freedoms and values we all hold dear.”

Lenn told The AJN, “The convention offered a range of inspiring speakers from whose wisdom ICJW’s dozens of affiliates may set their future initiatives.”

Honouring Lenn’s steadfast commitment during her presidency, acting national co-presidents of the National Council of Jewish Women of Australia, Victoria Nadel and Sylvia Deutsch commented, “Robyn has worked untiringly during [her term] to connect with Jewish women worldwide, visiting many of the 35 affiliates and their communities, informing them of ICJW’s work as a representative women’s voice at international fora.”

Founder and CEO of leading food rescue charity OzHarvest, Ronni Kahn, impressed upon the group the importance of preventing food waste, and was a highlight of the conference, according to many delegates.

“Ronni Kahn was stimulating and inspirational,” said ICJW chair of public relations and communications, Eva Robey. “She made us question what we are doing with purchasing food and with everyday life and develop an updated and improved attitude to the environment.”

Delegates, including Yael Brunner from the Czech Republic, who commended the range of “impressive women’s activists”, also embarked on excursions to The Great Synagogue and Sydney Town Hall.

During the conference, the ICJW issued a number of topical statements – one supporting the Irish referendum vote on abortion, which took place a few days prior to the conference.

Incoming president, Penelope Conway from the United Kingdom, was inaugurated at the gala dinner.