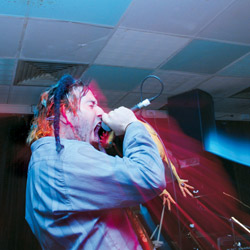 THE story goes that former Sex Pistols lead singer Johnny Rotten pulled up outside the offices of his record label in a Lamborghini. He climbed out of the car and admitted: “I know … it’s not very punk is it?”

Other things that aren’t “very punk” include having your film clip playing on a loop in a Viennese museum for the benefit of a middle-aged Japanese tour group.

Yet, this was the case for Melbourne punk rockers YIDcore earlier this year. The clip was part of an exhibition about racial stereotypes and tolerance, on loan from the Jewish Museum of Berlin.

The song was If I were a Rich Man from Fiddler on the Roof -— only it was a high-octane, thrash version, complete with screeching vocals and lightning tempo. Noticeably confused, holiday-makers would usually make their way to a more accessible piece.

Despite this, YIDcore frontman Bram Presser says there wasn’t one single moment when he knew it was time to put Scrambles -— YIDcore’s rubber chicken mascot -— out to stud.

“We haven’t played in eight months and we thought, ‘We could just peter out and disappear, or we could go out with a bang’,” Presser says, referring to YIDcore’s upcoming farewell extravaganza.

“So we figured, let’s make some big festival out of saying goodbye. It has been 10 years, an awesome 10 years, it’s been fun. But how many circumcision and hummous jokes can you make before it gets sad? The answer is probably one less than what we did. Plus the rubber chicken is actually starting to fall apart and we can only go as long as Scrambles is alive.”

When Presser and YIDcore co-founder Myki Slonim performed a punk version of Yerushalayim Shel Zahav -— an iconic ode to Jerusalem -— at an Australasian Union of Jewish Students (AUJS) revue in 1999, they intended it to be a one-line joke.

But punk is about the people, and you have to give the people what they want. From humble beginnings, the band went on to release four studio albums, tour the US twice, Israel three times and carve a niche on the Australian live-music scene.

The band was also signed to Rubber Records, the same label that gave Australian world-beaters Jet its start.

“The band’s done way better than it should have. The whole thing started as just a stupid joke at an AUJS revue -— it should have never done what it did. So I’ll just count my lucky stars, put it in a box, and every now and then pick over the pieces of vulcanised rubber, or whatever Scrambles is made of.”

But what started out as a piss-take became something much more substantial, and as the demand for YIDcore increased, so too did the band’s output. The follow-up to YIDcore’s self-titled debut album was a double album comprising Eighth Day Slice and Fiddlin on ya Roof.

The latter is a re-imagining of the Fiddler on the Roof soundtrack and a labour of love that Presser admits totally consumed him. For a 35-minute punk album, Fiddlin was a massive undertaking.

The album had guest vocalists including Ben Lee, Renee Geyer and Ella Hooper, as well as punk trailblazers Richard “Handsome Dick” Manitoba and Adam Goren of synth punk band Atom and his Package. It was recorded on two continents and took two years to complete.

But the album was a success and is regarded as the band’s best. With its release in 2005, YIDcore was at the peak of its powers and growing in popularity, and it was easy to see why.

Like all good punk music, the band’s brand of sacred-cow slaughtering captured the punk ethos, and resonated with disaffected, young outsiders. It wasn’t message music, but it certainly made a bold statement.

“We didn’t set out with a mission, we were just having fun. YIDcore started at a time when punk was at the forefront of youth culture, and people would come up to me and say, ‘This is speaking to the disaffected Jewish kids.’ Kids who didn’t fit into mainstream culture, or go to youth groups and didn’t go down the traditional Jewish kid path. We had pierced, tattooed kids coming up to us saying ‘I’m Jewish and I’m so happy I found a connection.’

“All these people that felt like they’d been shunted out of mainstream Judaism, but still had an identity that they connected with, saw us as a path back, or at least as a path to a different way of appreciating it [Judaism]. I just had a ball and maintained a strong Jewish identity through a means that if I didn’t have, I probably would have drifted.”

While the punk movement is defined by its anti-establishment attitude and shunning of the mainstream, Presser rages against the machine from the inside. He is a proud Jew, a lawyer and a deeply community-minded person. He has sat on countless community organisation boards and at one time was even president of an Orthodox shul. Not very punk. Or is it?

“I don’t like the thought that the next generation will be the same as this generation, and that the culture and the community will stagnate. I think it’s important for people with different views to be willing to go in there. Sure there are battles to be fought and my community involvement hasn’t always been pleasant, I’ve had some pretty ugly run-ins.”

But one shouldn’t be fooled by all the “I’m a good Jew” stuff. Presser ticks all the punk-chic boxes, from matted hair and five facial piercings, to the obligatory set of tattoos. And as expected, there has been a healthy dose of controversy over the band’s life span.

“It’s a common thing in Australia, and America as well, that anyone that has fun with it [Judaism] is labelled a self-loathing Jew, or they’re somehow a disgrace and that’s just wrong. The reality is that people connect in different ways and people construct their identities in different ways.

“The two songs we did that really pissed people off were Hatikvah and the Partisan Song. People got really pissed off about the Partisan Song. Partisans were the people of defiance who were standing up in the face of death and were amazing heroes. They were standing up against an oppressive culture that was destroying the Jewish people. The whole idea of standing up against oppressive authority and fighting for your right to survive is very punk.”

Presser has a message for his critics, though, and wowsers would be well advised to tread lightly. Over the years, three iconic Israeli songwriters have come out against YIDcore, accusing them of butchering their beautiful songs. Within months of their tirades, all three were dead. True story.

No punk retrospective would be complete without anarchy, indulgence and general bad behaviour -— and YIDcore is no exception. The lads were chased out of the Church of the Holy Sepulchre in Jerusalem by priests for drinking beer, they moshed at the Wailing Wall and then there is the hummous.

Where Iggy and Sid used razor blades on stage, Presser used hummous. In fact, he would cover himself in the delicious dip and often ended up having hummous fights with the crowd. While chickpeas are generally a safer option than razor blades, it too has its drawbacks.

“You get hummous on you at the beginning of a tour and don’t get a chance to wash and you’ve got 10-day old hummous caked to you by the end. A lovely, young lady who loved the band [read: groupie] came up and said, ‘Oh man, I totally wanted to be with you before the show, but I just can’t stand the way you smell.’ I have to admit I smelled pretty bad.”

YIDcore’s fans, however, were not exclusively disaffected Jewish youth. In fact, so broad was the group’s appeal, that at CBGB -— the Manhattan club that launched the careers of seminal bands such as The Ramones, The Patti Smith Group, Television and Blondie — Lubavitch Jews and skinheads moshed together at a gig that was more interfaith forum than punk concert.

At another gig in Santa Barbara, Presser asked a group of menacing skinheads to recite the Chanukah prayer before he started playing. When the first attempt fell on deaf ears, he persisted, asking the Dr Martens, suspender-wearing bruisers, who were now standing in a line near the front of the stage with arms folded, a second time. Eventually Presser threatened not to play until they complied — and comply they did.

Presser is now fronting a new punk band called Damn the Empire, which he describes as “a bit more serious and political”.

But this week the boys are bringing the madness one more time at the band’s spiritual home, The Espy in Melbourne’s St Kilda, where Presser plans to let it all hang out, come what may.

And for despairing YIDcore fans out there who fear the blockbuster gig at The Espy will be their last chance to catch the boys on stage, Presser drops a hint that should give them a shard of hope to cling to.

“If we decide we want to play again, we’ll just do a John Farnham [referring to the Australian singer’s seemingly endless farewell tour].

YIDcore will play at The Espy, St Kilda, on Thursday, December 17 from 11pm. Tickets available at the door.